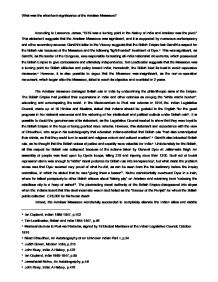 What was the short term significance of the Amritsar Massacre?

What was the short-term significance of the Amritsar Massacre? According to Lawrence James, "1919 was a turning point in the history of India and Amritsar was the pivot." This statement suggests that the Amritsar Massacre was significant, and it is supported by numerous contemporary and other secondary sources. Gandhi's letter to the Viceroy suggests that the British Empire lost Gandhi's respect for the British rule because of the Massacre and the following "light-hearted" treatment of Dyer.1 This was significant, as Gandhi, as the leader of the Congress, was responsible for leading all-India nationalist movements, which pressurized the British Empire to give concessions and ultimately independence. Tim Leadbeater suggests that the Massacre was a turning point for British attitudes and policy toward India; henceforth, the British tried its best to avoid repressive measures.2 However, it is also possible to argue that the Massacre was insignificant, as the non-co-operation movement, which began after the Massacre, failed to reach its objective and crumbled in 2 years. The Amritsar massacre damaged British rule in India by undermining the philanthropic aims of the Empire. The British Empire had justified their expansions in India and other colonies as carrying the "white man's burden": educating and emancipating the world. In the Memorandum to Post war reforms in 1916, the Indian Legislative Council, made up of 19 Hindus and Muslims, stated that Indians should be grateful to the English "for the great progress in her material resources and the widening of her intellectual and political outlook under British rule"3. ...read more.

In 1915, he had graciously accepted the Kaiser-i-Hind medal from the British Empire, and he had professed his admiration for British institutions and conventions of fair play. After the Massacre, however, he was a changed man; calling the British rule "satanic"14, Gandhi said that Britain no longer enjoyed any moral right to rule India. In his letter to the Viceroy, he stated that he would no longer give his "loyal co-operation" to the British Government of India15; Gandhi's opposition to British rule was massively significant, as he were to have a profound influence in leading the Congress with nationalist movements, winning reforms and concessions from the British. As the main author of Congress's report on the Punjab issue, he acquired new standing in the Congress. Under his leadership, and under the conditions of non-co-operation, Congress was changed from an elite body, dominated by the professional middle classes from the presidencies of Bengal and Bombay, into a mass organisation, with representatives from wide range of localities. Members increased dramatically from under 100,000 to 2 million by 1921. Thus the Amritsar Massacre led to the rise of Congress, which gradually began to represent the whole subcontinent. The Congress, under Gandhi's leadership, became the centre of nationalist movements; in 1920, it led the non-co-operation movement. Non-co-operation was extremely significant in that it elicited from the British a changed attitude to political agitation which posed them a new problem because it was non-violent and so wide-scale16. ...read more.

Unfortunately, there were no sources to be found written by Indians who were neither elites nor middle class but poor peasants, who was the main bulk of the Indian population, so this essay cannot claim that it has considered the views of all Indians. To minimize this flaw, I have used secondary sources of Judith Brown, Lawrence James and John Keay which describe the mood and the thoughts of the Indian public as a whole. The variety of the secondary sources also gave me a balanced view of events: Brown concentrated more on the perspective of Indians, James on that of the British, and Keay gave balanced viewpoints from both the British and the Indians. The Amritsar Massacre was clearly a significant event, although there are some arguments which suggest that it was less so. The Amritsar Massacre was the death of British philanthropy in the eyes of Indians, as Indians believed that the British public supported Dyer and his actions. However, this didn't mean that British philanthropy was dead, as there were British people who condemned Dyer and called for less repressive measures in India. The Massacre sparked off the flames of nationalism in the hearts of Gandhi and many other Indians (usually the elite and the middle class); although the mass of people may have joined the non-co-operation movement not so much due to nationalism, as they took part in the movement which united the subcontinent, they began to feel that they were all part of a nation. The Amritsar Massacre was, in a sense, a catalyst for Indian independence. ...read more.