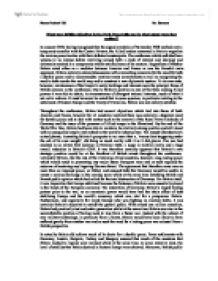 What were British objectives in the Paris Peace talks and to what extent were they realised?

In January 1919, having recognised that the signed armistice of November 1918 marked only a temporary ceasefire with the Central Powers, the Allied leaders convened in Paris to negotiate the various peace treaties with their defeated counterparts. The conference which unfolded bore witness to an intense debate revolving around both a clash of interest and ideology and ultimately resulted in a compromise which satisfied none of its creators. Regardless of whether Britain acted either as a mediator between America and France or was the French’s main opponent, Britain certainly entered discussions with overarching concerns for the need for both a durable peace and to accommodate wartime treaty commitments as well as recognising the need to both reorder the world map and to construct a new diplomatic system. To its own ends, however, maintenance of the Empire’s unity, holdings and interests were the principal focus of British concern in the conference. Due to Britain’s position as one of the three leading Allied powers it was able to obtain, in circumstances of divergent national interests, much of what it set out to achieve. It must however be noted that in some quarters, in particular relating to the settlement of Eastern Europe and the Treaty of Versailles, Britain was not entirely satisfied.

Throughout the conference, Britain had several objectives which tied into those of both America and France, however for all countries involved there was certainly a desperate need for durable peace and to deal with mattes such as the removal of the Royal Naval blockade of Germany and the issue of the presence of Allied troops in the Rhineland. By the end of the World War One, Britain had been able to maintain its relatively strong position and still stood with an unequalled empire and ranked as the world’s richest power. Yet Joseph Chamberlain’s coined phrase, lamenting Britain’s prospects to no more than a, ‘weary titan staggering under the orb of its own weight’, did bring as much reality with it as it did gloom. The war had resulted in an eleven fold increase in National Debt, a surge in taxation levels and a huge overall reduction in Britain’s GDP. It was therefore certainly apparent that Britain’s own strategic position would be at the forefront of British minds throughout the conference. Ultimately Britain, like the rest of the victorious Allied countries, desired a long-lasting peace which would result in preventing any major future European wars and as such required the outcome of neutering any lingering German threat. The agreement that therefore arose was no more than an imposed peace, or Diktat, and ensured both that Germany would be unable to mount a serious challenge in the coming years whilst at the same time satisfying British and French public opinion which had called for the total destruction of Germany. For Britain itself, it was imperative that Europe stabilised because the fortunes of Britain were essentially placed in the hands of the European economy. The restoration of Germany, Britain’s largest trading partner prior to the war, as an economic power would have had the chain effect of both stabilising Europe and the world’s economy, which was vital for a prosperous Britain. Furthermore, and especially for Lloyd George who was fighting an election battle, it was certainly Britain’s objective to satisfy the general public. With around one million casualties, Britain had practically lost and entire generation whilst at the same time Britain was also in the uncomfortable position of having most to lose from a future war. Indeed with the advent of new military technology, in particular from U-boats, Britain would have been likely to have suffered greatly from another war and as such the need for a lasting peace was colossal from a British perspective.

In actuality Britain did achieve much of its desire for a durable peace. Peace settlements with Germany, Austria, Bulgaria, Turkey and Hungary ensured that much of the sanctions that Britain wished to impose were realised whilst at the same time, to some extent at least, the level of stability that Britain desired in Eastern Europe was achieved. Moreover, British public opinion was also largely satisfied by the Treaty of Versailles. The extent to which it did make Germany suffer was widely accepted throughout Britain, with only minor criticism coming from those, such as Keynes, who believed it to be too harsh. Yet, and in particular from hindsight, there were some issues which would almost certainly oppose Britain’s ambition for a lasting peace. Most appreciable there was widespread discontent throughout Germany over the nature of the treaty. Derided as a ‘blank cheque’, the treaty imposed, under Article 231, that Germany accept full responsibility for the war and this lead to much outrage throughout Germany, with much of the population longing for the opportunity for revenge. Moreover throughout the rest of Europe there was also much resentment. Bulgaria, Turkey and Hungary were all left feeling aggrieved by the outcome of their respective treaties whilst in particular the reduction of Austria’s population to eight million and the prevention of a future Anschluss resulted in much bitterness. It was clear that the defeated Central Powers had much to feel aggrieved about and this certainly reduced the prospect of a durable peace. Events boiled to a head in the Chanak crisis and the resulting outcome indicated both that the imposed treaties were neither as strong as intended and also negotiable, for Britain this meant that their ambition for a stable Europe would never be completely realised. Lloyd George certainly reflected this in his Fontainbleu memorandum, in which he stated that if Germany was ‘unjustly treated’ it would ‘find means of exacting retribution’.

Moreover, Britain also recognised the need to accommodate wartime treaty commitments and to fulfil promises which had been made to countries, such as Italy, Greece and Romania, throughout the war. These issues extended back to the Treaty of London in 1915 where for example Italy has been persuaded to join the Allies, with the incentive of territorial gains of the Trentino and Tyrol as far as Brenner, Trieste and Istria along with full ownership of Albanian Valona and Britain was eager to ensure that all countries involved within the war would not be left aggrieved with the outcome of the conference. For Britain it was important to ensure that the European economy recovered quickly and as such it was a necessity that there was stability throughout Europe. Moreover for the status quo to be maintained it was vital that Britain sustained its wartime allies. As such Britain’s involvement in the League of Nations and the punitive nature of the Treaty of Versailles did much to maintain its relationship with America and France respectively. Whilst more generally, with the exception of the  relationship with Japan which was forgone for the sake of relations with America, Britain maintained its relationship with Australia, New Zealand, Greece, Turkey and Italy and therefore was reasonably  successful in its attempts to ensure the relative survival of the status quo and its wartime allies.

Linked to Britain’s desire for a durable peace came its ambition to guarantee its security.