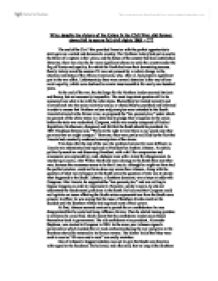 Why, despite the victory of the Unionin the Civil War, did former slaves fail to secure full civil rights 1865 - 77?

Why, despite the victory of the Union in the Civil War, did former slaves fail to secure full civil rights 1865 - 77? The end of the Civil War provided America with the perfect opportunity to start again as a united and democratic country. The Northern victory had put an end to the threat of a rupture in the Union, and the future of the country had been established. However, there was also the far more significant chance to unite the country under the flag of liberty and equality, for which the North had won their devastating success. Surely victory would be useless if it was not pursued by a radical change in the situation and status of the African Americans, who, after all, had played a significant part in the war effort. Unfortunately, there were several obstacles in the way of true racial equality, which were destined to remain insurmountable for nearly one hundred years. At the end of the war, the challenge for the Northern leaders seemed intricate and thorny, but not necessarily impossible. The most important question still to be answered was what to do with the rebel states. Should they be treated leniently and allowed back into the union relatively easily, or should they be punished and reformed in order to ensure that Northern values and principles were extended to the South. Lincoln believed in the former view, so proposed the "ten-percent plan," under which ten percent of the white voters in a state had to pledge their allegiance to the union before the state was readmitted. ...read more.

The Fourteenth Amendment, the Civil Rights Act and the extension in the power of the Freedman's Bureau were passed with the opposition of Johnson. These guaranteed blacks the rights of citizenship, the right to vote and the support of a powerful body working in their interest. For a few years, it looked as though equality might become more of a reality. In the elections of 1867 and '68 the blacks had the right to vote, and several reached positions of unprecedented seniority and by 1868 most states had repealed the Black Codes. For a brief period there were even two black senators, (the next to be elected was in 1966). Also in 1868 Johnson, after surviving impeachment charges the year before, was replaced as President by Ulysses Grant. Although equally as inept as Johnson, Grant did not try and obstruct Congress in the same way as Johnson had, and the huge republican majority in Congress had almost a free reign to carry on with Reconstruction. Why, then, as civil rights were starting to improve, and Reconstruction could at last carry on unhindered, did it prove such an abject failure? Seven years later it was effectively over, and the situation had almost reverted to that before the war. It seems that by and large the aim of the Radical Republicans was to create a South in the image of the North before the war, with some improvements such as black suffrage. ...read more.

There were very few blacks in the North, so the issue rarely entered the consciousness of the people. Moreover, the idea of actively doing something to promote the rights of the blacks was unfamiliar: many people thought that having their rights enshrined in the Constitution was sufficient. Politics, which could have kept the issue at the forefront of public opinion, lost interest. During the war politics had been something of vital importance, with the interests of the Union above those of parties or personalities, but by 1870 it had returned to the more mundane issues of attracting votes and being re-elected. Republicans realised they had to pander to the views of the Southern whites, while Northern Democrats realised the importance of the black vote. All the radical campaigners such as Stevens retired or lost their enthusiasm, and the government decided that it would be easier to cooperate with the Southern leaders. In 1877 Hayes was elected President, on the condition that he brought about the end of Reconstruction. In fact, it was already at an end. The Northern political will had died out, to be replaced by apathy in the North and continued and renewed discrimination in the South. Reconstruction had been tried, and it had failed. Some might say that it had been destined to fail from the very beginning, and that the South could not deal with such a radical change in such a short space of time. Whatever the reason for its failure, it left the American South backward and unenlightened for the next eighty years. ...read more.