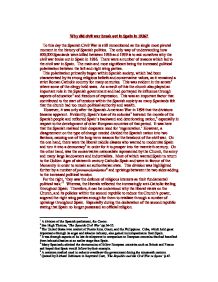 Why did civil war break out in Spain in 1936? To this day the Spanish Civil War is still remembered as the single most pivotal moment in the history of Spanish politics. The only way of understanding how 600,000 Spaniards were killed between 1936 and 1939 is to ask ourselves why the civil war broke out in Spain in 1936. There were a number of reasons which led to the civil war in Spain. The main and most significant being the increased political polarization between the left and right wing parties. This polarization primarily began within Spanish society, which had been characterized by its strong religious beliefs and conservative values, as it remained a strict Roman Catholic country for many centuries. This was evident in the senate1 where some of the clergy held seats. As a result of this the church also played an important role in the Spanish government and had portrayed its influence through aspects of education2 and freedom of expression. This was an important factor that contributed to the start of tensions within the Spanish society as many Spaniards felt that the church had too much political authority and wealth. ...read more.

In order to reduce the power of the army many officers were forced to retire early. Furthermore, these modifications angered the right, who had the support of many Spaniards that saw Spain as a fundamentally Catholic country. Consequently, leading the Nationalists to attempt to de-stabilize the republic through means of violence and conspiracy. It was only through the right's fear of communism and the left's fear of fascism that both groups found it impossible to consider the other's existence within Spanish politics. Either side's fear of extremism led to the intervention of other countries. Spain's neutrality during First World War due to its division over the two sides led to an economic boom. In return for its help during the First World War, Hitler and Mussolini supported the right's fascist movement. Furthermore, the fears of other European countries of communism caused the republic's lack of international support, except the Russian support due to the extreme communist parties such as the PCE12 and coalition of the left to form POUM13. The emergence of these extremist parties led to great political unrest. As well as CEDA, the extreme fascist groups such as the Carlists14, Alfonsine monarchists,15 JONS16 and the Falange17 participated in a number of conspiracies and street fighting against the left, especially in retaliation for the mass burning of churches around Spain, leaving the situation on the verge of a greater eruption. ...read more.

Inevitably problems occurred, in particular with regions such as Catalonia, Galicia and the Basque Country who had their own cultural identities and wanted regional autonomy. This was a larger problem for the Nationalists because they considered it as the dismembering of the Spanish 'Fatherland.' However, Catalonia and the Basque Country also held great importance to the Spanish economy, as they were the only regions in Spain that had been modernized through the great boom of industrialisation in the nineteenth century and consisted of thriving economies. The main Catalan organization was the Esquerra, which was formed by an alliance between democratic and republican groups led by Francesc Macia and also formed strong relations with the CNT. The republic was able to legitimise Catalans Statute of autonomy in the Cortes in September 1932 under its regional government, the Generalitat. However, the situation in the Basque country was far more complicated as the Basque attitudes towards the Spanish were full of disgust as they regarded them as foreigners20. The Basque Nationalist Party (PNV), being devotedly Catholic and conservative caused fear for the republic who thought that with autonomy the Basque's would help the right-wing parties. Although they did ally with the extreme right Carlists, they eventually realised that their only hope of achieving autonomy was if they supported the Republic. ...read more.