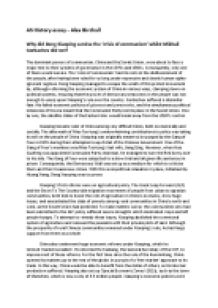 Why did Deng Xiaoping survive the crisis of communism whilst Mikhail Gorbachev did not?

﻿AS History essay - Alex Birchall Why did Deng Xiaoping survive the ?crisis of communism? whilst Mikhail Gorbachev did not? The dominant powers of communism, China and the Soviet Union, were about to face a major test to their systems of governance in the 1970s and 1980s. Consequently, only one of them would survive. The ?crisis of communism? had its roots in the disillusionment of the people, after having been ruled for so long under repressive and clearly human rights-ignorant regimes. Deng Xiaoping managed to escape the wrath of this protest movement by, although reforming the economic system of China in various ways, clamping down on political systems, ensuring that the power of democracy bestowed on the people was not enough to usurp upon Xiaoping?s rule over the country. Gorbachev suffered a dissimilar fate. His failed economic policies of glasnost and perestroika, and the simultaneous political leniencies of his era meant that the Communist Party lost its place in the Soviet Union. One by one, the satellite states of the Eastern bloc would break away from the USSR?s control. Xiaoping became ruler of China among very difficult times, both economically and socially. ...read more.

This was a complete volte-face on Xiaoping?s part. Although he opened up the idea of democracy to the people of China for the first time, Xiaoping was relentless in silencing the Tiananmen protesters, even resorting to massacre in order to hold ?peace?. When the defiance of the infamous ?Tank Man? was caught on tape, being seized by army officials, the Chinese government did its best to censor its release. Their attempts failed, and suddenly the whole world knew of the extent to which the Chinese government would go to maintain its hold of power on the people. Although Xiaoping was able to withstand these challenges to communism, Gorbachev could not. Gorbachev came to power in the Soviet Union succeeding a tide of disillusioned leaders whose ?inertia? in decision making meant that the Soviet Union?s economy, social tension and standard of living were starting to go stale. The age of these past leaders, due to their old age and ridiculously poor health, was termed the ?gerontocracy? of the Soviet Union. To rectify the inaction of these leaders and the disillusionment of the people towards the Communist Party, Gorbachev decided immediate reforms were needed to restart the economy and to regain social trust. ...read more.

On 21 August, tanks intruded on the Red Square, and an attack on the White House was imminent, but the tanks were barricaded by trolleybuses. When the coup was officially over, Gorbachev dismissed all members of the State involved with the coup from their positions. After this incident, Gorbachev knew that his popularity was waning. His last major political decision was to establish the Belavezha Accords, which denounced the 1922 treaty that established the Soviet Union. The Belavezha Accords were signed on December 8 1991, On December 25, Gorbachev officially resigned as President of the Soviet Union, replaced by Boris Yeltsin, and on December 26 the Soviet Union ceased to exist. Conclusively, it is clear that while there were similarities between the reformation of the Chinese and Soviet political and economic systems as a response to the ?crisis of communism?, the reason why Xiaoping succeeded this era and Gorbachev did not was because the Chinese government retained control over its people and did not allow opposition to the Communist Party. Gorbachev marginalised this power, which polarised the Soviet government. Gorbachev also relied on a ?trickle-down? economic policy to save the Soviet economy, which unfortunately did not achieve what it set out to do. Finally, Gorbachev?s attempts to ?democratise? the Soviet Union and prepare its federal system for reformation failed when it resulted in a complete dissolution of the entity. ...read more.