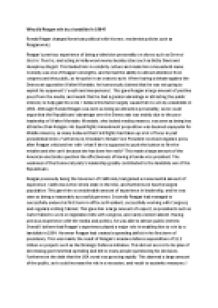 ﻿Why did Reagan win by a landslide in 1984? Ronald Regan changed American political with his new, modernist policies such as Reaganomics. Reagan?s previous experience of being a television personality on shows such as General Electric Theatre, and acting in Hollywood movies besides stars such as Bette Davis and Humphrey Bogart. This landed him in celebrity culture and made him a household name. Comedy was one of Reagan?s strengths, and he had the ability to attract attention from congress and the public, as he spoke in an oratorio style. When having a debate against the Democrat opposition Walter Mondale, he humorously claimed that he was not going to exploit his opponent?s ?youth and inexperience?. This gave Reagan a large amount of positive press from the media, and meant that he had a greater advantage in attracting the public interest, to help gain the vote. I believe this factor largely caused him to win by a landslide in 1984. ...read more.

This gave him a considerable amount of experience in leadership, and he was seen as being a reasonably successful governor. Secondly Reagan had managed to successfully endure his first term in office as President, successfully working with Congress, and regularly visiting Cabinet. This gave him a large amount of respect, as presidents such as Carter failed to work on legislation bills with congress, and rarely visited Cabinet. Having previous experience with the media and politics, he was able to attract public interest. Overall I believe that Reagan?s experience played a major role in enabling him to win by a landslide in 1984. However Reagan had created a spending deficit in his first term of presidency. This was mainly the result of Reagan?s massive defence expenditure of $1.2 trillion on projects such as the Strategic Defence Initiative. This did not accord to his plan of decreasing governmental spending and led to many people questioning his decisions. ...read more.

As government spending on welfare was cut, the poverty line was worsened. Reagan previously opposing the Landmark Civil Rights Act of 1964 was seen as doing little to combat the issue of racial inequality. I believe that his inability to focus on ethnic minorities caused a large amount of people to lose interest in him, taking away voters. Although the USA was in an even larger amount of debt after Reagan?s first term, I believe that his success of working with congress and cabinet helped him to win the election by a landslide. Furthermore, I believe that his massive appeal to Middle America outweighed the dissatisfied ethnic minorities and poor. I believe that the most successful factor that helped Reagan to win the 1984 election by a landslide was his being a personality, because he was often captured positively by the media, and managed to gain the hearts and minds of America. I believe that this was more important than his previous experience because, his presence was highly impacting and made him seem like a friendly character. ...read more.