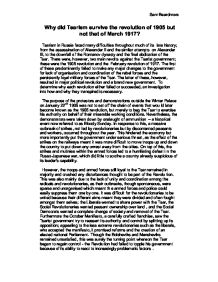 Why did Tsarism survive the revolution of 1905 but not that of March 1917? Tsarism in Russia faced many difficulties throughout much of its late history; from the assassination of Alexander II and the similar attempts on Alexander III, to the downfall of the Romanov dynasty and the final abdication of the Tsar. There were, however, two main revolts against the Tsarist government; these were the 1905 revolution and the February revolution of 1917. The first of these predominantly failed to make any major changes to the government for lack of organisation and coordination of the rebel forces and the persistently loyal military forces of the Tsar. The latter of these, however, resulted in major political revolution and a brand new government. To determine why each revolution either failed or succeeded, an investigation into how and why they transpired is necessary. The purpose of the protestors and demonstrations outside the Winter Palace on January 22nd 1905 was not to set off the chain of events that would later become ...read more.

Furthermore the October Manifesto, a carefully crafted franchise, saw the Tsarist government try to reassert its authority and control by splitting up its opposition; appealing to the less extreme revolutionaries such as the liberals, who accepted the manifesto, it promised reforms and the creation of an elected national Parliament. Though the Bolsheviks and Mensheviks remained unsatisfied, this was surely the turning point whereon the Tsar began to regain control - the Revolution had failed to topple his government because of its ability to react to increasingly problematic factors. Like the attempted Revolution in 1905, the February Revolution was almost completely leaderless and spontaneous. By 1917 patriotism within Russia was dangerously low; the heavy defeats during the First World War at Tannenburg and the Masurian Lakes led to lack of confidence and popularity with the Tsar's government. Furthermore the continued effort in the war made for a rise in support of the Marxist theory that said Tsarism was outdated and would not support the decisions of its people. ...read more.

The constant defeat against Germany leading up to the February Revolution left Russia in a state of desperation, with little reason to be patriotic, and led to a widespread requisite for change. This requisite was also shown by the Tsar's own Duma and Cossacks; they had previously stayed loyal and obeyed the word of the Tsar but began to disobey him upon his order to fire at the protestors in Petrograd and, eventually, they turned on him altogether, ultimately intercepting his train and suggesting that he abdicate. In conclusion, I believe the reason for the downfall of Tsarism in the revolution of 1917 but not that of 1905, was due to the uncalculated detriment of the Tsar's absence for fighting in the First World War. The war itself created a worse enough situation in Russia, but the absence of the Tsar meant that he could not readily react to any problematic uprising like he could during the revolution of 1905, this left his government wide open to rebellion and led to the eventual end of his reign. ?? ?? ?? ?? Sam Beardmore ...read more.