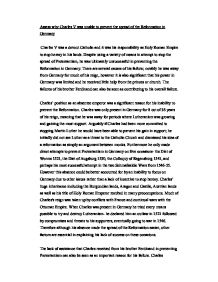 Why was Charles V unable to prevent the spread of protestantism?

Assess why Charles V was unable to prevent the spread of the Reformation in Germany Charles V was a devout Catholic and it was his responsibility as Holy Roman Empire to stop heresy in his lands. Despite using a variety of means in attempt to stop the spread of Protestantism, he was ultimately unsuccessful in preventing the Reformation in Germany. There are several causes of his failure; notably he was away from Germany for much of his reign, however it is also significant that his power in Germany was limited and he received little help from the princes or church. The failures of his brother Ferdinand can also be seen as contributing to his overall failure. Charles' position as an absentee emperor was a significant reason for his inability to prevent the Reformation. Charles was only present in Germany for 8 out of 36 years of his reign, meaning that he was away for periods where Lutheranism was growing and gaining the most support. Arguably if Charles had been more committed to stopping Martin Luther he would have been able to prevent his gain in support; he initially did not see Luther as a threat to the Catholic Church and dismissed his idea of a reformation as simply an argument between monks. ...read more.

This resulted in a further increase in Protestantism. In 1555 Ferdinand, as Charles' representative, signed the Peace of Augsburg, a treaty which gave Lutheranism official status within the Holy Roman Empire. Despite this, the role of Ferdinand in Charles' failure was arguably unessential as it is likely that Protestantism would have continued even without legal recognition, this was evident in the continuation of branches of Protestantism such as Calvinism and Anabaptism which were illegal by terms of the Peace of Augsburg. The lack of support and assistance Charles received elsewhere therefore needs to be considered. It could therefore be argued that the lack of support from the territorial princes was a more significant contribution to Charles' failure. Initially, they objected to Edict of Worms declaring Luther an outlaw until a general council had been called to reform 102 gravamena with the church. Moreover, the princes were an important source of support for Luther, especially after a great loss of peasant support after the 1524 Peasants' Revolt. Those who converted to Lutheranism were a threat to Charles as they had various successes with the Schmalkaldic League to further the spread of Protestantism. ...read more.

Alternatively, Charles may not have required support from elsewhere if he possessed greater power in Germany. Although Charles was able to propose laws, no means existed to ensure that these laws were enforced as there was no police force. In addition to this the Capitulation that he signed in 1519 upon becoming Holy Roman Emperor limited his power in that he was unable to bring foreign troops into Germany. This lack of power caused Charles to rely on the church and the princes, therefore was an important underlying cause for his lack of success in preventing the Reformation. In conclusion, a combination of factors were necessary for Charles failure to stop the Reformation. Factors that were outside of Charles' control were a more significant cause of this failure, as he was unable to stop the Reformation alone due to the limits of his power and existence of concerns elsewhere in his empire. It cannot fully be attributed to a lack of effort on Charles' part as his successes in the Schmalkaldic wars proved that he would have been capable of preventing Protestantism if it were not for a lack of cooperation from elsewhere. ?? ?? ?? ?? ...read more.