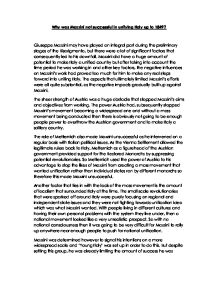 Why was mazzini not successful in unifying Italy up to 1849?

Why was Mazzini not successful in unifying Italy up to 1849? Giuseppe Mazzini may have played an integral part during the preliminary stages of the Risorigmento, but there were a lot of significant factors that consequently led to his downfall. Mazzini did have a huge amount of potential to make Italy a unified country but after taking into account the time period he was working in and other key factors, the negative influences on Mazzini's work had proved too much for him to make any real steps forward into uniting Italy. The aspects that ultimately limited Mazzini's efforts were all quite substantial, as the negative impacts gradually built up against Mazzini. The sheer strength of Austria was a huge obstacle that stopped Mazzini's aims and objectives from working. The power Austria had, subsequently stopped Mazzini's movement becoming a widespread one and without a mass movement being conducted then there is obviously not going to be enough people power to overthrow the Austrian government and to make Italy a solitary country. ...read more.

With people living in different cultures and having their own personal problems with the system they live under, then a national movement looked like a very unrealistic prospect. So with no national consciousness then it was going to be very difficult for Mazzini to rally up anywhere near enough people to push for national unification. Mazzini was determined however to signal his intentions on a more widespread scale and 'Young Italy' was set up in order to do this. But despite setting this group, he was already limiting the amount of success he was going to have just through the qualification rules that people needed to pass. To be a member of 'Young Italy' then you had to be forty years old or under, so by creating this rule you are severely hindering the chances of a mass movement being developed and Mazzini in effect made his group more of an elitist one. ...read more.

Another factor that contributed to Mazzini's downfall was the overall loyalty and support for the church. Pius IX was elected as Pope in 1847 and as he is continually gain popularity, it was stopping the likes of Mazzini from appealing to the Italian people for unification. The Pope also attracted support from other countries such as France and as Mazzini didn't have this support then it was going to be extremely difficult for him to make a name for himself. All these factors made Mazzini unsuccessful in his push for national unification. I think that his outlines and views were accurate but with people having focuses elsewhere it was simply not going to work and this consequently made Mazzini extremely ineffectual and unsuccessful. His ideas were too intellectual and impracticable for the time period he was working at and this was really the underlying cause to why Mazzini wasn't successful in unifying Italy up to 1849. ...read more.