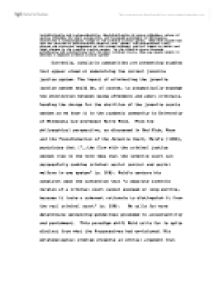 As the juvenile courts converge procedurally and substantively with the adult criminal courts, does any reason remain to maintain a separate juvenile justice system?

Jurisdictionally and jurisprudentially, decriminalization of status offenders, waiver of serious offenders for adult prosecution, and increased punishment of delinquents, constitutes a criminological triage in the juvenile justice system. Some have argued that this has resulted in discrimination based on race, gender, and socioeconomic class. Discuss the structural components of this triage strategy, and its' impact on social and legal changes in the juvenile justice system. As the juvenile courts converge procedurally and substantively with the adult criminal courts, does any reason remain to maintain a separate juvenile justice system? Currently, scholarly communities are presenting studies that appear aimed at undermining the current juvenile justice system. The impact of eliminating the juvenile justice system would be, of course, to pragmatically expunge the distinction between young offenders and adult criminals. Leading the charge for the abolition of the juvenile courts system as we know it in the academic community is University of Minnesota Law professor Barry Feld. From his philosophical perspective, as discussed in Bad Kids, Race and the Transformation of the Juvenile Court, Feld's (1999), postulates that ["....the flaw with the criminal justice system lies in the very idea that the juvenile court can successfully combine criminal social control and social welfare in one system" (p. 328). Feld's centers his complaint upon the contention that "a separate juvenile version of a criminal court cannot succeed or long survive, because it lacks a coherent rationale to distinguish it from the real criminal court" (p. 328). He calls for more determinate sentencing guidelines grounded in accountability and punishment. This paradigm shift Feld calls for is quite distinct from what the Progressives had envisioned. His epistemological premise presents an ethical argument that coincides with sentencing disparities and the irrational nature of the current juvenile justice system, which is inherently, systematically unfair at times, and, therefore, according to Feld, irrational. He is not calling for the reconstruction of the juvenile justice system but its total abolishment. ...read more.

Interview May 13, 2002: Deputy District Attorney Sherry Bravaski: Garfield: My interview today covers the question as to weather or not we should keep the current juvenile justice system. Bravaski: Yes, well it's good to have some idea of what we're going to talk about ahead of time. Garfield: I'm heading toward that question, the thesis of my paper, but, if you could, comment on the disparity in sentencing between races in America. Bravaski: As I stated earlier, the impact of disparity in sentencing guidelines does not necessarily reflect discriminatory practices of the District Attorney's Office, but rather problems that goes back to the homes of various individuals who happen to come from low income families. Also, we (D.A's Office) do not keep information pertaining to race, and socioeconomic background, and its impact on sentencing outcome here at the office. In addition, it has always been our position not to assess this type of information based on race or socioeconomic status. Garfield: Garfield: Sure, many would argue that justice is justice, and one shouldn't discriminate between people simply because of their age, particularly for a violent offense. On the other hand, children are still children, aren't they? How do you view this dilemma? In other words, which side of the debate do you fall on as it pertains to the question whether or not to maintain a separate juvenile justice system? Bravaski: Personally, I feel that is good reasons to keep a separate juvenile justice system, because I feel that there is a much better chance for rehabilitating a juvenile offender. However, I see that there is a problem in the current system, especially state by state, but there are also much greater problems in the adult system as well. Yet, let me be even more clearly about this, you know, the question of the juvenile court system. From years of experience, it is, without question, better to explore the avenue of offering social service accommodation before incarceration of punitive sanctions are imposed. ...read more.

For me-not yet a successful adult, perhaps, but nonetheless... -it was the martial arts program offered to youngsters in my hometown. Furthermore, the juvenile justice itself should be reinvented. Horror stories abound from children, now young adults, who tell of being transferred like a piece of luggage from one foster home to another during much of their childhood. Mentors and Juvenile Probation officers should be assigned personal accountability for specific individuals, individuals who remain with them throughout their childhood. If a child is young and commits a crime, that child may be assigned to Mr. X. If, even 5 or 6 years later, the child re-offends, that child is not assigned to Mr. Y, but, rather, Mr. X picks up his file and, while reading it says, "Oh, yes, I remember Johnny. He had a problem with anger, because his biological father beat him and his stepfather just neglected him." If children really are our future, which is true for every generation, then they're worth investing in. They're worth investing in, because there is, in fact, more hope for change, when it comes to a young, juvenile offender than there is for an adult. Statistics indicate this, as does my own personal experience. Deputy District Attorney Sherry Bravaski (May 11, 2002). Interview: Assessing the efficacy of the Juvenile Justice System. Finley, Michael., Schindler, Marc (1999). "Punitive Juvenile Justice Policies and Impact on Minority Youth." Federal Probation 11-115 63 No 2., p.11-15. Lipsey., Mark (1999). "Can Intervention Rehabilitate Serious Delinquents?" Journal of Annals of the American Academy of Political and Social Science v564: pp203-214. Vleet, Van., K., Russell (1999). "The Attack on the Juvenile Justice System." Journal of Annals of the American Academy of Political and Social Science v564: pp203-214, Voigt, L., Thornton, Jr., W.E., Barrile, L. & Seaman, J.M. (1994). Criminology and Justice. New York: McGraw- Hill, Inc. Walker, S., Spohn, C., & DeLone, M. (1996). The Color of Justice: Race, Ethnicity, and Crime in America. Belmont, CA: Wadsworth Publishing Co. Walker, Samuel. (1998). Sense and Nonsense about Crime and Drugs. Belmont CA: Wadsworth Publishing Company. ...read more.