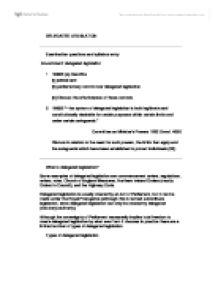 Unlawful parts of orders may be severed. Publication Notice must be given a month before publication in local press, and a copy must be available for public inspection. They must be available for public inspection at the local authority office, and for sale for a sum not exceeding 20p; but these obligations are frequently flouted. By-laws are generally passed under the authority of the Local Government (Miscellaneous Provisions) Act 1982 or the Local Government Act 1972. Challenge to the validity of delegated legislation Judicial review is the only process by which delegated legislation may be challenged. Although called review, this nomenclature is somewhat misleading, since the process is at best a scatter-gun approach, relying on a well-heeled challenger noticing the defects of legislation, something that is not easy to do. Thus for every piece of delegated legislation that is challenged it is likely that a dozen more invalid laws survive. However, the process is highly effective once the delegated legislation has been challenged. As to the challenge of codes of practice, guidelines, etc., which have no legal status, but can still have a major impact on the running of the country, as with, for example, the Police and Criminal Act Codes of Practice, the position is uncertain, but it seems that the more specific the guidelines, (especially where statute obligates the documents' production) the more likely that judicial review will take place. There are two methods of challenge: as a defence to an action, or by direct challenge ...read more.