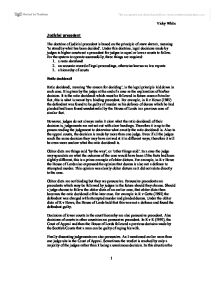 Judicial precedent The doctrine of judicial precedent is based on the principle of stare decisis, meaning 'to stand by what has been decided'. Under this doctrine, legal decisions made by judges in higher courts set a precedent for judges in equal or lower courts to follow. For the system to operate successfully, three things are required: 1. a ratio decidendi 2. an accurate record of legal proceedings, otherwise known as law reports 3. a hierarchy of courts Ratio decidendi Ratio decidendi, meaning 'the reason for deciding', is the legal principle laid down in each case. It is given by the judge at the end of a case as the explanation of his/her decision. It is the ratio decidendi which must be followed in future cases of similar fact, this is what is meant by a binding precedent. For example, in R v Howe (1987) the defendant was found to be guilty of murder as his defence of duress which he had pleaded had been found unsubstantial by the House of Lords in a previous case of similar fact. ...read more.

Finally dissenting judgements are also persuasive. As I mentioned earlier more than one judge sits in the Court of Appeal. Sometimes the verdict is reached by only a majority of the judges rather than it being a unanimous decision. In this situation the judges in the minority will also give the reason behind their decision. This is called a dissenting judgement. Law Reports In order for the system of precedent to operate and expand, cases must be recorded and published. Until the mid 19th Century law reports were published privately. Standards of reporting varied greatly and some were little more then a few scribbled notes by students and even members of the public who then sold them to lawyers. However, when the Incorporated Council of Law Reporting was established in 1865 law reporting became more comprehensive and systematic. There are also private law reports. These include the All England Law reports, published by Butterworths, which started in 1936. Another source of law reports is the media. Some newspapers have their own law reports, for example The Times Law Reports. ...read more.

Reversing This is similar to overruling except it is generally done on appeal. The verdict is changed and this automatically changes the precedent, even if the judge does not specifically say so. Disapproving This is when the judge declines to follow the existing precedent because he feels that it is inappropriate to the current case. By narrowing a ratio decidendi A judge in a later case decides that the previous ratio will only apply to those circumstances; therefore he is not bound by it. This is generally done when the old ratio has been criticised. By demoting a ratio decidendi to an obiter dictum Where a judge in a later case decides that the precedent set was actually an obiter statement, not a ratio, he therefore does not have to apply it. By stating that the ratio was wrong (per incuriam) The ratio in a previous case had ignored conflicting law and the precedent is therefore invalid. By referring to the new provisions of the Human Rights Act 1998 This allows judges to change precedents which conflict with this Act (applies to precedents set before 1998). ?? ?? ?? ?? Vicky White 1 ...read more.

Summary:
Describing precedent is well covered for ratio/obiter and law reporting. The hierarchy of the courts is covered only by diagram.
Avoiding precedent has accurate description which needs to be supported by reference to cases.
Quality:***