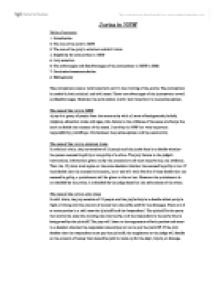 The plaintiff is the party that starts the case who is suing the other party, and the respondent is the party who is being sued by the plaintiff. The jury will listen to the arguments of both parties and come to a decision whether the respondent should pay or not to pay the plaintiff. If the jury decides that the respondent must pay the plaintiff, the magistrate or the judge will decide on the amount of money that should be paid to make up for the dept, injury, or damage. Eligibility for jury service in NSW Anyone in the community who is enrolled in the State electoral roll is eligible to participate in the jury service. The jury system gives people from the community a chance to participate in the justice system. Therefore people whose occupation involves around the government and legal system such as the governor, judge/magistrate, lawyer, police officer or prison officer cannot participate in jury service. ...read more.

- The decision is made by more than 1 person giving an opportunity for the accused to be not guilty - Jurors are not controlled by the government - Gives an opportunity to people from the community to participate in the justice system - The use of juries leaves the judges free from the pressure of deciding cases Disadvantages - All jurors must agree on the same verdict for the final decision-guilty or not guilty-even though they're against it - Some people are not allowed to participate - Some people may not understand the legal system - Juries cannot give reasons for the decision they made In conclusion, I think the jury system is an acceptable system because it plays an important part in the justice system. Not only it gives an opportunity to the community to participate in the justice system it gives an opportunity to the person accused to be judged equally by a number of people. Also the juries are independent and they are not controlled by the government, therefore it is a fair system. By: azntkfkd ...read more.