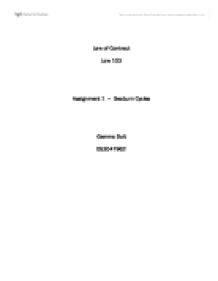 Law of Contract Law 103 Assignment 1 ~ Seaburn Cycles Gemma Bolt 053047962 A contract is a legally binding enforceable agreement between two or more parties. Where an issue of a breach of contract arises in court, the court has to decide whether or not a contract has been made. To do this they must establish whether an offer has been made or whether it was simply an invitation to treat. If an offer has been made the courts must then look to establish whether there has been an acceptance. An offer is a statement of willingness by one party to enter into a contract on certain terms made with the intention that it shall become binding on acceptance. Whereas an invitation to treat is an expression of willingness to enter into negotiations which will eventually lead to a contract being formed. Acceptance is an unqualified expression of assent to the terms of the contract proposed by the offeror. The first thing to establish is whether an offer or an invitation to treat was made. In this situation, following the case of Partridge v Crittenden [1968] 1 WLR 1204, the initial advertisement in the newspaper would constitute an invitation to treat. ...read more.

David stated that if he did not hear anything from Jason he would assume he accepted the offer. However there is another rule in acceptance that acceptance of an offer will not be implied through mere silence. Also an offeror cannot impose a contractual obligation upon on offeree by stating that unless the offeree specifically rejects the offer, he will have accepted it. This was shown in the case of Felthouse v Bindley (1802) 11 CB (NS) 869. This means that Jason has not accepted the offer and is therefore not contractually bound to sell him the stock of bicycles. In this situation the only possible acceptance of the original offer would be by Martin meaning that Jason would only be contractually bound to sell Martin the stock of bicycles for �25,000. In addition to this Jason entered into a unilateral contract with Darren to carry out electrical work for �2,000. A unilateral contract is a contract whereby one party promises to pay the other a sum of money if that party completes a specified task. With a unilateral contract acceptance only takes place when the specified task has been fully completed. This was illustrated in the case of Carlill v Carbolic Smoke Ball Co. ...read more.