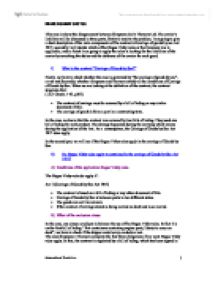 This case is about the disagreement between Simpsons Ltd v Thowers Ltd. The carrier's liabilities will be discussed in three parts, firstly to resolve the problem, I am going to give a short description of the main components of the contract of carriag...

This case is about the disagreement between Simpsons Ltd v Thowers Ltd. The carrier's liabilities will be discussed in three parts, firstly to resolve the problem, I am going to give a short description of the main components of the contract of carriage of goods by sea Act 1971, secondly I will decide which of the Hague Visby rules or the Common law is applicable, and to finish I am going to apply the rules in looking for the liabilities of the carrier by searching the duties and the defences of the carrier for each good. I) What is the contract "Carriage of Goods by Sea?" Firstly, we have to check whether the case is governed by "the carriage of goods by sea", or not and Secondly, whether Simpsons and Thowers satisfy all the conditions of Carriage of Goods by Sea. When we are looking at the definition of the contract, the contract stipulates that: ( JCT Chuah, 7-01, p201) * The contract of carriage must be covered by a bill of lading or any similar document of title. * The carriage of goods is from a port in a contracting state. In the case, we know that the contract was covered by two bills of lading. ...read more.

The carrier and the shipper are free to negotiate their own terms of carriage subject only to the operation of the common law.( JCT Chauh, p 273, 8-11). Art 1(c) Rules are satisfied only if: * The cargo must actually be stowed on deck * The bill of lading states clearly that this is indeed the case Moreover in the case law Svenska Traktor, Aktiebolaget v Maritime Agency (Southampton) ltd. (1953) it was stated that: "A mere general liberty to carry goods on deck is not, in my view, a statement in the contract of carriage that goods are in fact, being carrying on deck. To hold otherwise would, in my view, do violence to the ordinary meaning of the words of art. I (c). I accordingly, hold that the ... tractors were being carried by the [ship owners] subject to the obligations imposed on them by art. III, r. 2 of the Act" (ER Hardy Ivamy, 1977, p51). In this case the Hague Visby rules do apply. III) What is the liability of the carrier for each product? I will look at the carrier's duties and defences. A) What is the liability of the carrier for the loss of five containers of engine parts? ...read more.

Whereas Colinvaux ( 1971,p92) remember that: "Unseaworthiness must cause loss but the carrier will only be responsible if unfitness of the ship "becomes a real cause of loss or damage to the cargo". This fact has been supported by the judgement of the case Tanner v Benneh. For this case the court of appeal that "not with standing an exception of negligence, the ship owner was responsible for the whole of the damage. The carrier could also try to use defences of the carrier due to the negligence of the ship management, who "left a cargo open after an occasional routine inspection". The management of the ship relates to those things done for the safety of the ship. It was not the case which is why the crew still made a mistake. Also the case law Smith, Hogg v Black sea and Baltic general insurance, the court of appeal ( Lord Wright) affirmed the decision that : "the owners were liable whether the master was negligent or not, the ship was Unseaworthy and the Unseaworthiness was a cause of the damage. Conclusion Obviously, the carrier has breached his duties in the first and the second contract. The defence of the carrier does not bring enough objections to acquit Simpsons Ltd. He is therefore liable for the loss of the five containers of engine parts and the damage of 1,000 gallons paint. ...read more.