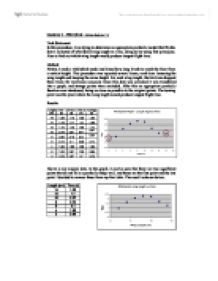 Determine an appropriate parabolic model that fits the data I collected of whirlybird wing length vs. time, doing so by using first principles.

In this procedure, I am trying to determine an appropriate parabolic model that fits the data I collected of whirlybird wing length vs. time, doing so by using first principles. Also to find out which wing length would produce longest flight time.

Firstly, I made a whirlybird model and timed how long it took to reach the floor from a certain height. This procedure was repeated several times, each time lessening the wing length and keeping the same height. For each wing length, the bird was dropped three times for maximum accuracy. Once this data was collected it was transferred into a graph, and strange points were excluded.

Above is my original data. In the graph, it can be seen that there are two significant points that do not fit in a parabolic shape well, and these are the first point and the last point. I decided to remove these from my final data. The result is shown below.

I will be referring to the letters in this function to explain changes.

a<0 then hat shape

a>0 then cup shape

Positive c then moves up

Negative c then moves down

The first function I tried was:

I chose -0.5 because when a<0 it will become a hat shape. I chose -8, because when b is negative, it moves to the right, and since the length 8cm and time 2.

There are a few assumptions that had to be made during this testing. One was that there was no wind, and that air resistance remained constant, otherwise this could cause changes in flight time. This could be improved if the test was done in a vacuum. As well as this, it must be assumed that distance of the drop remained constant and that the time of flight was taken accurately. One major problem was reaction time, which has caused miscalculations, and this can be easily seen in our first and last data points, in which the time of flight was shortest. This can be improved by using a type of sensor device that can accurately measure the flight time.

In conclusion, I was successfully able to predict through trial and error and first principals, an appropriate parabolic quadratic function, which integrated well with my original data points. I was also successful in finding the wing length that would produce maximum flight time, by using a graphics calculator to find the max turning point.