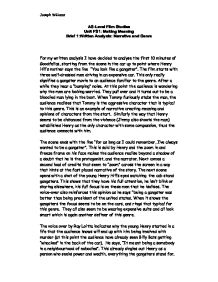 Analyse the first 10 minutes of Goodfellas

AS-Level Film Studies Unit FS1: Making Meaning Brief 1:Written Analysis: Narrative and Genre For my written analysis I have decided to analyse the first 10 minutes of Goodfellas, starting from the scene in the car up to point where Henry Hill's mother says the line "You look like a gangster". The film starts with three well-dressed men driving in an expensive car. This only really signifies a gangster movie to an audience familiar to the genre. After a while they hear a "bumping" noise. At this point the audience is wondering why the men are looking worried. They pull over and it turns out to be a bloodied man lying in the boot. When Tommy furiously stabs the man, the audience realises that Tommy is the aggressive character that is typical to this genre. This is an example of narrative creating meaning and opinions of characters from the start. Similarly the way that Henry seems to be distanced from the violence (Jimmy also shoots the man) establishes Henry as the only character with some compassion, thus the audience connects with him. The scene ends with the line "for as long as I could remember, I've always wanted to be a gangster". ...read more.

The semi-close up on him just looking around, plus the line "Paulie didn't have to move for anybody" again reinforces this opinion the audience will have of him. When Henry starts working at the cab stand he says that "My father, who was Irish and send to work at the age of eleven". This creates authenticity, as during this time there would have been a lot of immigrants in Queens New York, where the film is set. Also the fact that the film is set in Queens creates authenticity as this was a predominate area of the gangsters during this time. The way that Henry stops going to school to work at the cab stand shows how dedicated he is to this dream. The line "I knew everybody, and everybody knew me" shows that Henry is starting on the "Rise and Fall" scenario that is also typical to this genre (e.g. Scarface, Casino). This is supported later on in the 10-minute sequence when he says the line "Some kids carried my mothers shopping home. It was out of respect." In just 10-minutes he has turned from a no-body into the most powerful kid on his block. ...read more.

The scene where they put the postman in the oven also has a less obvious message that it gets across. This is the first scene where we see Henry and Paulie together. Like the first time we see him, all Paulie does is stand in the doorway. It is almost like he has come to watch, to see what they do to the postman. Or maybe hes there to make the postman more afraid. Whatever his reason, this scene can be viewed as Henry final integration into the mob, because he now has the support of Paulie as well. Paulie's power, although hinted at throughout the sequence, only really comes to light in the next part. The fact that Paulie has guys whom "all they did all day long is take phone calls" for him, shows that this guy doesn't even have to use a telephone to run his empire. The Sequence ends with the line "Henry you look like a Gangster." This comes after we've have just seen Henry blow up some cars, which could be seen as his first real bit of criminal activity. Looks like a gangster, and acts like a gangster, the rise of Henry Hill has truly begun by the end of the first 10 minutes. Joseph Williams ...read more.