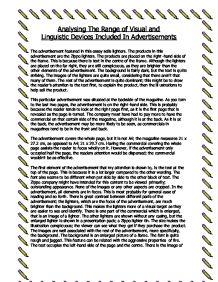 Analysing The Range of Visual and Linguistic Devices Included In Advertisements.

Analysing The Range of Visual and Linguistic Devices Included In Advertisements The advertisement featured in this essay sells lighters. The products in this advertisement are the Zippo lighters. The products are placed on the right-hand side of the frame. This is because there is text in the centre of the frame. Although the lighters are placed on the far right, they are still conspicuous, as they are brighter than the other elements of the advertisement. The background is fairly dark, but the text is quite striking. The images of the lighters are quite small, considering that there aren't that many of them. The rest of the advertisement is quite dominant; this might be to draw the reader's attention to the text first, to explain the product, then the illustrations to help sell the product. This particular advertisement was situated at the backside of the magazine. As you turn to the last two pages, the advertisement is on the right-hand side. This is probably because the reader tends to look at the right page first, as it is the first page that is revealed as the page is turned. The company must have had to pay more to have the commercial on that certain side of the magazine, although it is at the back. ...read more.

There aren't any cold or harsh colours; the background is a warm red and orange, the lighters are red, bright silver, lime green and so on. This is quite the opposite to the rough image conveyed by other elements. For example, the text is coarse and jagged. There are no evident links between the colours of the products and the remainder of the advertisement. There is quite a contrast between three parts of the commercial; the background, the text and the pictures. The background is quite dark, so it isn't noticed a significant amount. The text is white and therefore more noticeable; more so because it is on a dim background. The lighters are also very prominent as they contain brighter colours than the background, so consequently the lighters are more observable, even though they are quite small. The font and size of the text varies. The sentence 'ZIPPO with "ATTITUDE" uses a large and intense font. The word 'with' is in a smaller font. The font is quite rough and coarse. This is to fit in with the whole concept of the lighters and the wrestlers. The two words 'Zippo' and 'attitude' are shown in a larger size to help sell the product. ...read more.

This acts sub-consciously as it is not displayed in large, bold text, but it is perceived and memorized. This just tells the reader it is a genuine and quality product. I haven't seen this specific advertisement before; it is not part of a larger campaign. However, Zippo is an American company, and so is the WWE; the featured company. Therefore, this commercial might be a portion of a larger campaign in the USA. I personally think that the advertisement has some cunning features which help sell the product. For example, slogans, which combine both lighters and wrestling. The colour scheme fits in quite well. Overall, this commercial is well produced and well aimed at the certain audience; 16 and above, possibly males - wrestling is associated more with the male society. By completing this analysis, I can conclude that this advertisement is very effective and sells the product well. However, there are some elements of the commercial which could have been improved to achieve a better effect. More specifically, different colours could have been used in the text to create more contrast and to get more attention. To assist selling the product, a picture of a wrestler using the merchandise could have been used to endorse the lighter. Except for these attributes, the advertisement is successful and is practical to sell the goods. By Surjeet Mann ...read more.