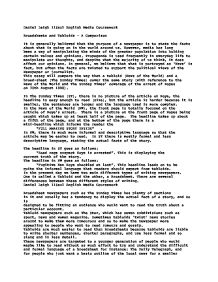 Broadsheets and tabloids - A comparison.

Daniel Leigh 11Saul English Media Coursework Broadsheets and Tabloids - A Comparison It is generally believed that the purpose of a newspaper is to state the facts about what is going on in the world around us. However, media has long been a way of manipulating the minds of the greater population into holding certain values and opinions. Propaganda is used frequently in everyday life to manipulate our thoughts, and despite what the majority of us think, it does affect our opinions. In general, we believe that what is portrayed as 'News' is fact, but often the facts are twisted to support the political views of the Newspaper or journalist. This essay will compare the way that a tabloid (News of the World) and a broad-sheet (The Sunday Times) cover the same story (with reference to the News of the World and The Sunday Times' coverage of the arrest of Noyes on 30th August 1998). ...read more.

In ST there is mostly formal and less descriptive language, stating the actual facts of the story. The headline in ST goes as follows: "Road rage suspect Noye is arrested". This is displaying the correct truth of the story. The headline in NW goes as follows: "Fugitive Ken Noye shackled at last". This headline leads on to be quite the informal language that readers should expect from tabloids. In the present day we have two main different types of writing newspapers. One is called a Tabloid and the other, a Broadsheet. There are several differences between these different styles of writing. Daniel Leigh 11Saul English Media Coursework Broadsheet newspapers such as The Sunday Times has plenty of sections in it and usually has a tendency to display the actual fact of a story, and so is designed to be fitting an audience who would want to read the truth about a particular account. ...read more.

The tone of an article of a tabloid is therefore easier for the audience to empathise and sympathise with the people or characters in their articles. In this section, I will be using the reference of an article which was written by a broadsheet newspaper, The Daily Telegraph, and a tabloid newspaper, News of the World. On The Daily Telegraph's front page, about one fifth of the page is taken up by the first part of the story (which carries on inside the newspaper) and on the News of the World's front page, half of the page is of a picture describing the main event, the headline (which takes up a quarter of the page) and the contents. The daily Telegraph's headline is only about one square inch, if not that, then less. The information which I have relayed above shows that their are many differences between the layout, settings, structure and language of Tabloids and Broadsheets. ...read more.