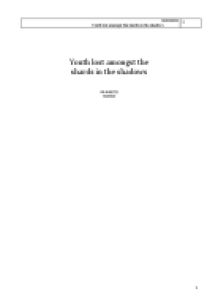 Commentary on a Newspaper Article by Russel Brand.

﻿XXXXXXXX Youth lost amongst the shards in the shadows Youth lost amongst the shards in the shadows An essay by XXXXXX Youth lost amongst the shards in the shadows The English society today is affected by big social differences, which results in a very sharp and clearly defined divided class society, where social mobility is not very easy ore even almost not existing. The lower range haven?t got a place to fit in, and many youngsters from these social lower classes, young people with no education, young people with bad family backgrounds, often feel out of the community, they are not getting any recognition and the politicians have ignored them and the fact of it way too long! In an article published on The Guardian?s website in august 2011, the author Russell Brand pin down some of these conflicts and problems. The author is more explicitly commenting on the riots that happened last year in England. The article?s receiver could be intellectual people, people who have an interest in politics and in society, certainly the working-class, also students as elders, the article is mainly directed to leftist, as the guardian is a traditional left- winged newspaper and the paper stand in opposition to the ruling government. Inasmuch the article is a website article, the audience properly is a bit broader than its ordinary audience is, also assuming readers from the right- wing would have an interest in reading the article, they may even get into a debate on the internet side, fighting and arguing for their point of view. ...read more.

Brand?s writing style is very fluent, he distinctly uses humor as a very well working poetic- device, such as sarcasm and irony. It makes the text much lighter and much more consumable, even though the topic is a tough one. He has a special talent of setting up scenes in his reader?s mind, which also makes the text very alive. The text?s composition has kind of the same setup as a standup comedy show, and Brand sets up several scenarios and merges them well together, connecting the dots all the way through the article with just the right flow. He tells about some personal happenings, which he makes a point with, again with a good portion of self-irony, for example, when he tells his audience about his own rebellion time, and then connects it to today?s youngsters and compares the two episodes to make his point. He uses a great deal of sarcasm, an example for his sarcasm is, the part he writes about, that some may say the real victim is the conservative politician, that had to shorten her holidays and then came out saying the behavior were "unjustifiable" and "unacceptable: his comment to this is : Wow! Thanks guys! What a wonderful use of the planet's fast-depleting oxygen resources. Now that's been dealt with can we move on to more taxing matters such as whether or not Jack The Ripper was a ladies' man?? He also uses some metaphors, such as the reality show Big Brother. ...read more.

by this way of using the language ? and I must say, Brand uses the technique so its outcome gets very effective. The last passage sums the whole commenting on the subject up, into some few poetic phrases. Brand clearly comes out with his point of view and attitude ? he want his reader not to close their eyes for what is happening ? he requests them not to sweep away these problems even if they are not out in the open. I must say Brand is a very talented writer with brilliant skills that touches a broad audience. Besides an observable writing talent, his writing contains a strength approaching a serious problem using humor. Brand?s word combinations makes his text easy to read and he has an adventurous natural flow, which makes it very exciting. However, most important in this commentary, is the attitude to the problem. Brand?s article contains a strong cultural and social criticism and he expresses his wish for individuals to face the injustice unequal society. He encourages his reader to not only leaving it all up by voting on the right party, and not only by leaving it all up to our politicians - who apparently aren?t doing anything about these problems ? he encourage his reader to sweep away the carpet and face the problem right out there in the blue by giving the young people what they really need!! Very well said Mr. Russell Brand ? I couldn?t agree more! . ...read more.