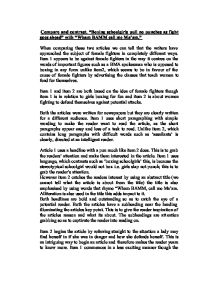 Compare and contrast, "Boxing schoolgirls pull no punches as fight goes ahead" with "Wham BAMM call me Ma'am." When comparing these two articles we can tell that the writers have approached the subject of female fighters in completely different ways. Item 1 appears to be against female fighters in the way it centres on the words of important figures such as a BMA spokesman who is opposed to boxing in any form unlike item2, which seems to be in favour of the cause of female fighters by advertising the classes that teach women to fend for themselves. Item 1 and item 2 are both based on the idea of female fighters though item 1 is in relation to girls boxing for fun and item 2 is about women fighting to defend themselves against potential attacks. Both the articles were written for newspapers but they are clearly written for a different audience. Item 1 uses short paragraphing with simple wording to make the reader want to read the article, as the short paragraphs appear easy and less of a task to read. ...read more.

The subheadings are attention grabbing so as to captivate the reader into reading on. Item 2 begins the article by referring straight to the situation a lady may find herself in if she was in danger and how she defends herself. This is an intriguing way to begin an article and therefore makes the reader yearn to know more. Item 1 commences in a less exciting manner though the paragraph is short and makes the reader read on as they feel they have not read enough of what has potential to be a thrilling article. Unlike item 2, item 1 is written by a male and is the name is not highlighted. Item 2 highlights the fact that a woman has written the article to make the reader feel a connection with the writer as the article is about women and even though is bound to be biased somehow makes it more reliable as the subject of the article writes it. Item 1 does not highlight the fact that a male has written it, as it does not want to project an image of being s****t, as the article is disapproving of female boxing anyway. ...read more.

This makes the reader want to know more about it. Both the articles interview people on their subjects. Article 1 interviews people who have contradicting opinions on the issue though asks important people who are opposed to the issue such as a BMA spokesman and not so significant people who are in favour of the issue such as a lavatory attendant. This will make the reader value the BMA spokesman's outlook far more than the lavatory assistants purely due to their status in life. Unlike article 1, article 2 only questions people who support the articles issue. This makes the reader concur to the writers point. Article 1 is more effective as an editorial as it is subjective and allows the reader to have an open mind about the topic. The wording is straightforward and easy to read making the reader comfortable to read it. Not like item 2s difficult and complex read. The article has short paragraphs and sentences making it look like an undemanding read with a large picture, which is effortless to understand unlike the complicated cartoon in item 2. ...read more.