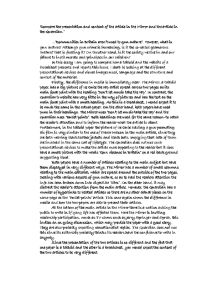 'Compare the presentation and content of the article in the Mirror and the article in the Guardian.' ...'Communities in Britain aren't used to gun culture'. However, what is gun culture? Although gun crime is increasing, is it the so-called glamorous 'culture' that is fuelling it? On the other hand, is it the society we live in and our failure to instil morals and principles in our children? In this essay I am going to compare how a tabloid and the website of a broadsheet presents and reports this issue. I shall be looking at the different presentational devices and visual images used, language and the structure and context of the material. Firstly, the difference in media is immediately clear. The Mirror, a tabloid paper, has a big picture of Ice Cube the rap artist spread across two pages as its main focal point with the heading 'Don't let music take the rap'. In contrast, the Guardian's website has very little in the way of pictures and has the text as the main focal point with a small heading. As this is a broadsheet, I would expect it to be much the same in the actual paper. ...read more.

This in the Mirror's case is contradictory to the picture of a rap star holding a gun. The Mirrors main article is supposed to be Trevor Nelson's views on the subject written by a reporter. On the other hand, Willber Willberforce, a programs editor at '1Xtra', expressing his views on the subject, writes the Guardian's main piece: Both articles are mainly opinion and have little or no facts in them; this is a sentence from the Mirror's article. 'All a kid has to do to prove he is the baddest boy in the area is to get a rumour going he's got a gun.' This is a sentence from the Guardian's piece. 'Music is in everybody's house, in everybody's car, but does not dictate peoples morals.' Furthermore, the language in both articles is quite informal; '...if you pardon the pun, would be not to give them any ammunition.' since the Guardian is a broadsheet, a more formal approach to the subject would have been expected. Moreover, the difference in the level of vocabulary used by both papers is little or none; this is an extract from The Guardian: '...It is a social problem that has lots of contributing factors. ...read more.

In addition, it said that the most popular urban artists sing love songs, in spite of the fact that Eminem is one of the biggest selling urban acts and one of the most controversial due to the nature of his lyrics. Furthermore, in this piece there are a number of questions asked by the writer that are left unanswered: 'If there were no records glorifying guns, would they still feel they needed to carry a gun?' Or 'Where do the influences on peoples behaviour begin and end?' In conclusion, the way in which the two papers covered the issue was very different from each other, although surprisingly they did have their similarities in vocabulary and language. Moreover, there were clearly some advantages and disadvantages in the medium chosen to report the subject, such as; for the Guardian, the internet enabled them to use a number of hyperlinks to satellite article but the reader would have to know the web address to get to their site first. In contrast the Mirror could guarantee that the reader would at least glance at each article whether they chose to read it or not but because they were using paper they had a limited amount of space available for articles. Written by Debo Amon ...read more.

*** This is a good essay. Some of the presentational devices and linguistic features have been analysed well and points have been supported with apt quotations. The analysis would be much stronger if the candidate had made more links to readership and political leanings.