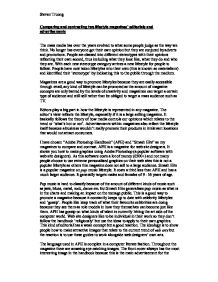 Comparing and contrasting two lifestyle magazines' editorials and advertisements The mass media has over the years evolved to what some people judge as the way we think. No longer has everyone got their own opinion but they are conjured by adverts and promotions. People are classed into different stereotypes with their opinions reflecting their own accord, thus including what they look like, what they do and who they are. With each new stereotype category arrives a new lifestyle for people to follow. People have now taken lifestyles into their own (this is known as materialism) and identified their 'stereotype' by indicating this to the public through the medium. Magazines are a good way to promote lifestyles because they are easily accessible through retail, any kind of lifestyle can be promoted as the amount of magazine concepts are only barred by the levels of creativity and magazines can target a certain type of audience and still sell rather than be obliged to target a mass audience such as TV. Editors play a big part in how the lifestyle is represented in any magazine. The editor's view reflects the lifestyle, especially if it is a large selling magazine. It basically follows the theory of how media controls our opinions which relates to the trend or 'what's hot or not'. ...read more.

If the image looks good then people are more likely to buy it because they will suggest that the producers of the magazine knows how to make attractive art. They try to shorthand most of the content because they repeat words over and over again in the tutorials. Smash Hits language is Basic English; this is to make it easier for the younger audience to interpret the magazine. Many of the images in the magazine are pictures of celebrities with more focusing on whoever is in the public eye. The graphics are large and colourful this is 'easy on the eye' and attracts attention to it because of the primary colours reflecting off the opposite colours (i.e. black and white, red and blue, yellow and blue etc.) When you hear your favourite artist sing a song you tend to sing along with it (in public or not), APH is like a handbook of lyrics to songs and people read off these lyrics and use it to write their own songs. This is the major difference between the two magazines. One is aimed at artists and the other is aimed at the pop music market. The readerships are bound to differ. Therefore the editorials are apt to justify with their target audience. Although they are different in lifestyles they do share comparisons. ...read more.

The adverts consist of music albums of pop bands and the other magazine that the publisher publishes also feature in the magazine on full pages. Smash Hits normally comes with 'freebies' such as a single or extra miniature books that are sealed onto the front cover. APH came with a guide to how you can dual boot your system with Linux and Windows; it also came with a disk with Linux on. Freebies are popular with magazines because people like to think that they are getting more than what they paid for. This makes the consumer more likely to buy the magazine because of this 'give away' offer. Lifestyle magazines cannot represent a lifestyle completely; it just shows a reflection of an opinion on its chosen lifestyle. A person cannot instantly know about new trends instantaneously, they need to be told about them through the media or other forms of communication. This is why they buy magazines on their favourite lifestyles and to learn about what 'their world' is up to. Lifestyles are endorsed as guidance for people to lead and live their lives. They are popular with people because it allows them to 'belong' to a society. With this self - belief of acceptance it gives people a push through life. This can be related to religion; as where people follow a religion in credence of hope and these lifestyles can be seen as hope to be accepted into society. Steven Truong ...read more.