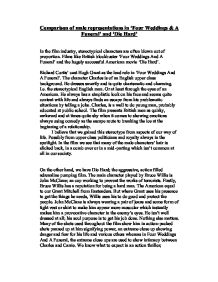 Discuss how Ethnity is represented in KiDULTHOOD

Comparison of male representations in 'Four Weddings & A Funeral' and 'Die Hard' In the film industry, stereotypical characters are often blown out of proportion. Films like British blockbuster 'Four Weddings And A Funeral' and the hugely successful American movie 'Die Hard'. Richard Curtis' cast Hugh Grant as the lead role in 'Four Weddings And A Funeral'. The character Charles is of an English upper class background. He dresses smartly and is quite charismatic and charming. I.e. the stereotypical English man. ...read more.

I believe that we gained this stereotype from aspects of our way of life. Possibly from upper class politicians and royalty always in the spotlight. In the film we see that many of the male characters' hair is slicked back, in a comb over or in a mid-parting which isn't common at all in our society. On the other hand, we have Die Hard; the aggressive, action filled adrenaline pumping film. The main character played by Bruce Willis is John McClane; an cop working to prevent the works of terrorists. ...read more.

He isn't well dressed at all; his soul purpose is to get his job done. Nothing else matters. Many of the shots used throughout the film show him in action-packed shots panned up at him signifying power, an extreme close up showing danger and fear for his life and various others whereas in Four Weddings And A Funeral, the extreme close ups are used to show intimacy between Charles and Carrie. We know what to expect in an action thriller; explosions, panic, guns etc. Unlike a rom-com where an extreme close up wouldn't be used to show fear and danger. ...read more.