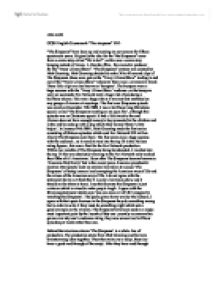 John smith GCSE English Coursework "The simpsons" EN3 "The Simpsons" have been up and running on our screens for fifteen spectacular years. Originally the idea for the "the Simpsons" came from a comic strip called "life in h**l" ,as this was a comic strip hanging outside of James. L. Brooks office , the executive producer for the "Tracy Ullman Show". "The Simpsons" cartoon was created by Matt Groening. Matt Groening decided to make 30 to 60 second clips of The Simpsons ,these were put on the "Tracy Ullman Show" leading in and out of the "Tracy Ullman Show" whenever there was a commercial break. These little clips are also known as 'bumpers'. The bumpers were a huge success with the 'Tracy Ullman Show' audience ,as the bumpers were so successful Fox Network took a huge risk of producing a half-hour sitcom. This was a huge risk as it was not test marketed on any groups of viewers at any stage. The first ever Simpsons episode was aired on December 17th 1989, it was a half-hour long Christmas special called 'The Simpsons roasting on an open fire', although this episode was an Christmas special it had a little twist to the end ,Homer does not have enough money to buy presents for the children and in the end he ends up with a dog which they named 'Santa's little helper'. In January 14th 1990 , Matt Groening made the first series consisting of thirteen episodes which cost Fox Network $10 million ,finally The Simpsons were here. The first series was a huge success with the audience , as it raced its way into the top 20 in the Neilson rating figures , this was a first for the Fox Network production. Within two months of The Simpsons being broadcasted ,it reached into the top 15 this was absolutely amazing as the Fox Network only reached four-fifths of all Americans . ...read more.

The Simpsons base their comedy mainly on stereo-typical views and the things we find funny I.e. things like violence, making fun out of the celebrities, Bart's mischief's. We are made to laugh by the satire and parody which is used in many of the jokes but most of the time elastic band reality makes us laugh, a good example of this could be the episode "Bart's New Dad". The elastic band reality in this episode would be when Homer and Tom were fighting and they rolled down the cliff fighting and came up the cliff fighting too. That was a good example of elastic band reality in action. However different age range will find different things funny. I think that the younger audience would find most of the violence and arguments funny whereas the older audience would find that funny too but also they would find the visual and verbal jokes funny. The younger audience love it when Homer strangles Bart. They also love the slapstick comedy in the show, slapstick comedy is comedy that u laugh about when someone is getting hurt an example of this could be when Homer strangles Bart. They also love itchy & scratchy and krusty the clown. I have not just made this up as I have back up evidence for my points, as I asked my cousin jay who is ages eight what he thought of the Simpsons. This is what he had to say " I think that the Simpsons are very funny and I love it when Homer strangles Bart and when Bart pranks Moe". From my cousins statement you can see that the younger generation follow Bart as a role model. Furthermore the older audience would be a bit more mature and would find the film references funny and also the parody of older movies, role rehearsals, stereotypes. There you see two collaborations of audiences which are made to laugh by 'The Simpsons'. ...read more.

I don't think that Bart shares a relationship with Maggie because I have never seen Bart playing with Maggie or spending time with Maggie, therefore I think that he does not have a relationship with Maggie at all. Lisa's relationship with Homer is a typical father and daughter relationship as they have their ups and downs but in the end they are always together. Lisa's relationship with Marge is great because she can talk to Marge whenever she has a problem that needs solving or when she's in trouble. Lisa's relationship with Bart is a typical brother and sister relationship as they are always fighting but they love each other and care for each other. I font think that Lisa has a relationship with Maggie because she is never seen with Maggie. I also think that Maggie does not share a relationship with anyone in the family apart from Marge. I say this because I have never seen Maggie with anyone else in the family apart from Marge. The family in whole I think are not a good role models for families to follow because the family do not spend enough quality time together which does not set a good example, although each person in the family has their own role which they play, they are more or a bad family than good. I say this because in vacations everything goes wrong and Bart does not listen to Marge and Homer. Homer forgets Maggie's name, which is not a good sign because if he was a good father and they were a good family this would not happen. In conclusion The Simpsons is a spectacular sitcom that has been on our screens for over fifteen spectacular years. Which is a heck of a long time for a cartoon, but then we ask ourselves the question how do they do it?. Well The Simpsons are different to any other sitcom family although they are cartoon characters, they deal with real life situations like bills, house chores, going to and from work. Furthermore they also deal with serious issues like bullying and politics ...read more.