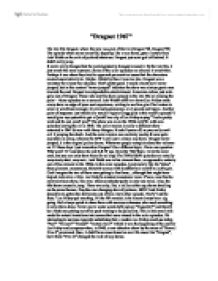 "Dragnet 1967" The late 60s Dragnet, where the year was part of the tile (Dragnet '68, Dragnet '69) The episode where some crazy kid, doped up like a race horse, gets a lecture from Jack Webb on the evils of pot/acid/whatever. Dragnet just sorta got left behind. It didn't really jump. It never really changed but the world gradually changed around it. By the late 60s, it just wasn't the same anymore. Some of the color episodes are okay so it wasn't that. Perhaps it was when they tried to approach provocative issues that the characters reacted unrealistically to. Maybe. I think by then it was too late. Dragnet was a mainstay for almost two decades. That's pretty good. I would almost say it never jumped, but in this context "never jumped" indicates the show was always great even towards the end. Dragnet was dependable entertainment. American culture just sorta grew out of Dragnet. Those who say this show jumped in the late 60s are missing the point -- those episodes are a scream! Jack Webb's stiff-as-a-board Joe Friday made every show an edge-of-your-seat experience, waiting to see him give The Lecture to some a) wreckless teenager, b) callous businessman, or c) spaced-out hippie. Another point of suspense: just which role would Virginia Gregg play in this week's episode? ...read more.

This is little small talk made for natural transitions into scenes that were missed in the color episodes. It's interesting to surmise cigarrette substitutes that a modern Joe Friday could use today. "Pez?" "Valium?" "Donut?" "Tootsie Roll?" I think it was the beginning of the end for Joe Friday and company when, in 1968, a new detective show by the name of "Hawaii Five-0" premiered. Sure, it didn't have cases based on real-life cases like "Dragnet", but I think "Five-O" changed the look of cop shows. "Starsky and Hutch" Along with "All in the Family" and "Seinfeld", "Starsky & Hutch" was among the best shows ever on the air. From 1975-1979 I had only missed the last episode because it had been moved from 9 to 10 pm, one hour past my curfew. I did however throw a tantrum and in the morning was given my first lesson on repairing drywall. Unfortunately in my anger, I had thrown the Gran Torino model I had made through the wall. Now 29 years later, I find myself forgetting phone numbers and names...but for some strange reason, I never forgot the S&H plate number, 537-ONN...SCARY. I was so happy to hear about the movie, but when I found out that they were replaced by Wilson and Stiller, I was sick. ...read more.

Crime was little more than petty larceny. However as the 1960s and the early 1970s brought ever more realistic police series from both sides of the Atlantic to the British public, Dixon Of Dock Green would seem increasingly unreal, a rosy view of the police that seemed out of touch with the times. Yet the writer of the series maintained to the end of the program's time on air that the stories in the episodes were based on fact and that Dixon was an accurate reflection of what goes on in an ordinary police station. Police Constable(PC) George Dixon was played by veteran actor Jack Warner. The figures of both Dixon and Warner were already well known to the British public when the series was launched. In 1949 in the Ealing film The Blue Lamp, Warner had first played the figure of Dixon. A warm, avuncular policeman, his death at the end of the film at the hands of a young thug (played by Dirk Bogarde) was memorably shocking and tragic. British playwright Ted Willis, who with Jan Read, had written the screenplay for The Blue Lamp, subsequently revived the figure of Dixon for a stage play and then wrote a series of six television plays about the policeman. Thus the BBC was leaving little to chance in spinning-off the figure and the situation into a television series. ?? ?? ?? ?? ...read more.