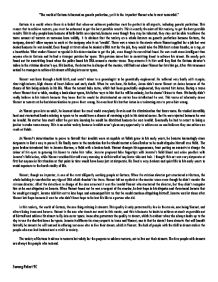 Gattaca is a world where there is a belief that whoever achieves perfection must be perfect in all aspects, including genetic perfection. This means that to achieve success, you must be enhanced to get the best possible results. This is exactly the aims of this society; to get the best possible results. This is why people born because of faith-births are rejected; because even though they may be talented, they may not be able to achieve the same amount of success as someone born validly. It is obvious that the society as a whole focuses on genetic perfection because Gattaca, the company, doesn't allow anyone to work at the company who is an 'Invalid'. There was a scene in the movie where Vincent applied for a job but was denied because he was invalid. Even though at times when he denied a DNA test for the job, they would take the DNA from a door handle, or a cup, or a handshake. ...read more.

As Vincent grew into an adult, he learned about the cruel world everybody lives in and the discrimination that faces some. He studied incredibly hard and memorised books relating to space so he would have a chance of receiving a job in his desired career. But he was rejected because he was an Invalid. No matter how much effort he put into learning he would be dismissed because he was Invalid. Eventually he had to resort to being a janitor to make some money. This is an unfair society because Invalids aren't given any opportunity to achieve as no one believes they can achieve as much as Valids. As Vincent's determination to prove to himself that Invalids were as capable as Valids grew in his early years, he became increasingly more desperate to find a way to prove it. He finally came to the conclusion that he should contact a Gene Broker so he could disguise himself as a Valid. ...read more.

This quality is only possessed by few in the movie, one being Vincent, and others being Irene and Jerome. Vincent is the one who stands out most in this movie, and this is because he looks to achieve as much as possible out of himself and achieve his dream to fly into outer space. Irene also possesses the quality to dream, which is evident when she always looks up to the sky to see the shuttles leave for space. Jerome is different in many aspects to Irene and Vincent, one is that he doesn't have dreams that will benefit himself; he dreams he will succeed in offering someone else to live their dream, which is Vincent. The lack of people with the skill to dream makes the people who can feel isolated and a misfit in society. The society of Gattaca is driven to success but solely for the purpose to achieve success, not to live out their dreams. The few people with dreams are always the people who succeed. ?? ?? ?? ?? "The world of Gattaca is focused on genetic perfection, yet it is the Imperfect Vincent who is most successful." Sarang Paleri 9C ...read more.