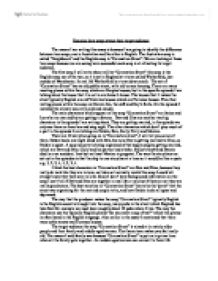 Examine how soaps attract their target audience The reason I am writing this essay is because I am going to identify the difference between two soaps, one is Australian and the other is English. The Australian soap is called "Neighbours" and the English soap is "Coronation Street". We are looking at these two soaps because we are seeing how successful each soap is at attracting its target audience. The first soap I will write about will be "Coronation Street" this soap is the English soap out of the two, so it is set in England at a town called Wetherfield, just outside of Manchester. In real life Wetherfield is a town down south. The set of "Coronation Street" has an old pebble street, with old terrace housing. There are many meeting places within the soap which are Peoples houses, but in the specific episode I am talking about the house that it is set in are Janise's house. The houses that it makes the street typically English are old Victorian houses which are Terrance houses. The other meting places within the soap are Rovers Inn, the caf� and Roy's Rolls. On the episode I watched the climate was very cold and cloudy. The main characters which appear on the soap "Coronation Street" are Janice and Les who are married but are getting a divorce. ...read more.

The target audience the soap "Coronation Street" is aimed at is mainly older people and their family and middle aged women. The theme tune makes you feel really old. The reason I said family was because "Coronation Street" is put on in prime time when all the family gets together. An middle aged women can convert to there life through an soap like "Coronation Street" there is also another reason an middle age women might watch "Coronation Street" this reason would be that there are many female characters in the soap. ................ One of the characters in "Coronation Street" is a certain race to this will encourage other races to watch the soap. Another character in the soap has they same affect on the audience and that is Roy because he owns his own company other people who think that they can't relate to "Coronation Street" they watch how is business is going. I know this because my Uncle Robert does the same thing. The storyline with Janice and lose of her boyfriend is another eye catcher for the audience as many people can relate to it as they might have lost there boyfriend through death or just breakup. The other storyline with attracts the audiences attention is Maxine and her that she is carrying even tough the baby isn't her boyfriends she will have to face the truth one day, another case of the same story is in "Eastenders" where Lisa has had Phil's baby. ...read more.