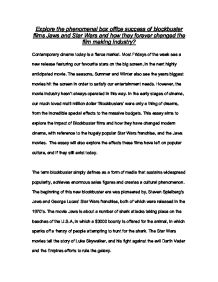 Explore the phenomenal box office success of blockbuster films Jaws and Star Wars and how they forever changed the film making industry?

Explore the phenomenal box office success of blockbuster films Jaws and Star Wars and how they forever changed the film making industry? Contemporary cinema today is a fierce market. Most Fridays of the week see a new release featuring our favourite stars on the big screen, in the next highly anticipated movie. The seasons, Summer and Winter also see the years biggest movies hit the screen in order to satisfy our entertainment needs. However, the movie industry hasn't always operated in this way. In the early stages of cinema, our much loved multi million dollar 'Blockbusters' were only a thing of dreams, from the incredible special effects to the massive budgets. This essay aims to explore the impact of Blockbuster films and how they have changed modern cinema, with reference to the hugely popular Star Wars franchise, and the Jaws movies. The essay will also explore the effects these films have left on popular culture, and if they still exist today. The term blockbuster simply defines as a form of media that sustains widespread popularity, achieves enormous sales figures and creates a cultural phenomenon. The beginning of this new blockbuster era was pioneered by, Steven Spielberg's Jaws and George Lucas' Star Wars franchise, both of which were released in the 1970's. ...read more.

The Deconstruction stage is when the generic elements are placed out of context, for example, Kurt Wimmer's Equilibrium (2002), where the mise en scene is sci-fi, yet the story is dealing with other issues, such as emotion and fascism. A strong sense of Star Wars' popular culture impact was discovered in the British 2001 census. An Internet campaign that spread via email encouraged the public to identify their religion as 'Jedi' or 'Jedi Knight' in the other religion section. According to the BBC, the number of people in the U.K that were faithful to the Jedi religion that year was around 390,000 strong. Both movies also showed new technological innovations and furthered some already used. Jaws used rare filming techniques such as the reverse dolly zoom, originally used in Alfred Hitchcock's movies. This is when the dolly on which the camera is held moves backward on its track, whilst the camera zooms in on the face. This is used when Police Chief Martin Brody (Roy Scheider) spots danger in the sea during the beach scene. Special effects were further improved with the use of animatronics. The mechanical shark, named Bruce (Times online) was actually three sharks, used for different movements. One of these was just for use in the water, improving technical areas of special effects. ...read more.

Before, movies were aimed toward more adult audiences, with adult themes. However, with movies such as Star Wars and Jaws aiming at a more varied target audience, the whole family can enjoy the movies, also relating to higher ticket sales and repeat viewings of the movies, driving profits in Hollywood even higher. The trend seems to have continued, as kids films have continued this. Some films tend to include more 'adult' humour hidden away. For example, in Who Framed Roger Rabbit? (1988), a line reads: 'Is that a rabbit in your pants or are you just glad to see me?' and in Ghostbusters (1984) in the ghostbusting montage scene where Raymond Stantz (Dan Aykroyed) is 'pleasured' subtly by a ghost. In conclusion, I think that both Star Wars and Jaws were incredibly important to Hollywood and the movie industry. The films themselves have set certain standards that must be reached when creating a movie, changing the way we make and watch movies through time. The movies also show the prospect of how much money can be made not only through the actual screenings of films, but countless forms of merchandising also. The influence that these films hold as well as their directors will be renowned for many years to come, and will remain as timeless Hollywood gems that will never be forgotten. ...read more.