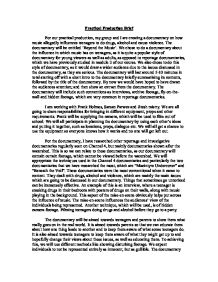 For our practical production, my group and I are creating a documentary on how music allegedly influences teenagers to do drugs, alcohol and cause violence.

This is so we can relate to these documentaries, as our documentary will contain certain footage, which cannot be viewed before the watershed. We will appropriate the techniques used in the Channel 4 documentaries and particularly the two documentaries that we have researched the most, which are "Macintyre Undercover" and "Beneath the Veil". These documentaries were the most conventional when it came to content. They dealt with drugs, alcohol and violence, which are mainly the main issues which are going to be discussed in our documentary. Things that sometimes go unnoticed can be immensely effective. An example of this is an interview, where a teenager is smoking drugs in their bedroom with posters of drugs on their walls, along with music playing in the background. This aspect of the mise-en-scene obviously helps put across the influence of music. ...read more.

The Equipment for the filming will be a mixture of technology, such as a Mini-Digital DV Camera, which we will borrow from the school, along with an external boom microphone, which is used for a much clearer and sharper sound. For lighting we will use an external light and have to try and use mainly natural light to give it more of a realistic look. We will also use a Digital camera outside of school for other extra footage, which we can then take certain extracts from our filming and putting them together in the schools editing room, using their Adobe premiere 6.5 software. This will allow us to edit certain shots and music; also to add special effects like slow motions, fade-outs, dissolves etc. Finally, we will be able to use voice over to give it that professional documentary finish. By Pradip Maisuria Word Count: 765 ...read more.