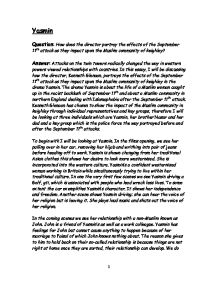 How does the director portray the effects of the September 11th attack as they impact upon the Muslim community of keighley? (Drama &quot;Yasmin&quot;)

Yasmin Question: How does the director portray the effects of the September 11th attack as they impact upon the Muslim community of keighley? Answer: Attacks on the twin towers radically changed the way in western powers viewed relationships with countries. In this essay, I will be discussing how the director, Kenneth Glenaan, portrays the effects of the September 11th attack as they impact upon the Muslim community of keighley in the drama Yasmin. The drama Yasmin is about the life of a Muslim woman caught up in the r****t backlash of September 11th and about a Muslim community in northern England dealing with Islamaphobia after the September 11th attack. Kenneth Glenaan has chosen to show the impact of the Muslim community in keighley through individual representatives and key groups, therefore I will be looking at three individuals which are Yasmin, her brother Nasar and her dad and a key group which is the police force the way portrayed before and after the September 11th attacks. To begin with I will be looking at Yasmin. In the films opening, we see her pulling over in her car, removing her hijab and writhing into pair of jeans before heading off to work. Yasmin is shown changing from her traditional Asian clothes this shows her desire to look more westernised. She is incorporated into the western culture. Yasmin's a confident westernised woman working in Britain while simultaneously trying to live within her traditional culture. In one the very first few scenes we see Yasmin driving a Golf, gti, which is associated with people who lead wreck less lives. To some extent the car exemplifies Yasmin's character. It shows her independence and freedom. Another scene shows Yasmin driving; she can hear the voice of her religion but is leaving it. She plays loud music and shuts out the voice of her religion. In the coming scenes we see her relationship with a non-Muslim known as John. ...read more.

Later on when she is released, we see her waiting for Faisal, who for the first time she calls her "husband". Dramatic music is used here to show the tension. We later see both husband and wife going home together; they use public transport, which shows unity. When they get home, we hear the adhaan being played. Faisal takes out his prayer mat then we see Yasmin place her prayer mat next to Faisal's. He hugs and apologises to her, at this point we see him crying. The next morning we see Yasmin bring a cup of tea for Faisal where she takes the opportunity to ask for a divorce. Faisal reluctantly gives it to her. He leaves that day taking his suitcase and goat. Yasmin gives him a hundred pounds that he can live on until he gets a job. Yasmin in a way is honorable to Faisal. Yasmin's so-called relationship with John is just that. The only thing that happens between them is a kiss. The attacks on the twin towers change John and his feelings for her. The fact that she was married and did not tell him really changes his feelings for her as he feels he cannot trust her anymore. Yasmin still has feelings for John but the remark, made by John when he is in the pub and says "they" haven't even apologised in which case he is referring to the Muslims, provokes Yasmin and makes her react with anger. The director uses long shots suggesting that there is no physical contact between the two; he also shows them apart from each other suggesting no romance between them and all throughout the drama their relationship is only as friends and nothing more. The contrast between the conversations with each other before and after the attacks on the twin towers are the same, both seem physically relaxed and look physically relaxed with each other, as they don't feel awkward with one another, and there is also no formality between their conversations. ...read more.

Looking at the police, before the advents of the September 11th they are seen driving around the streets now and again. After the happenings of September 11th we saw them on every street, searching every household. The images of the big vans and the raids showed the police being very violent and sensitive. Not before long, they are searching the Hussain household looking for Faisal whom they wrongly consider a terrorist. They hold them all down at gunpoint including John; the high shot used here by the director symbolically suggests the white culture lowering the status of the Muslim culture. The police service does not seem to be pleasant either. They question Yasmin when she goes to visit Faisal to sign the divorce papers. They arrest her for withholding information but later release her. There is one scene in the drama where two police officers are dressed in ordinary clothes they try to bribe Nasar on giving them information on someone by offering to pay him five hundred pounds. He refuses their bribery and shouts, "Watch out the pigs are on the loose". Overall as a young Muslim British woman living in Rockdale, I liked this drama as young Muslims were looked in a serious way on the television. It was very impressive the way the director used a woman at the heart of the story. The feminine view was looked at in detail, which is not always brought forward. Yasmin is basically about a woman wanting to mix in with both cultures but after the attacks on the world trade center they clash and she is caught up between them. Both brother and sister go through a process from being corrupt to understanding the significance of their religion. The turning point of this drama is that it is parallel between the world and the individuals; this is shown through the structure of the drama. There have been big changes in both Yasmin and Nasar. Yasmin at the end returns to her religion as she finds consolation in it. Whereas Nasar becomes a freedom fighter. ?? ?? ?? ?? 1 ...read more.