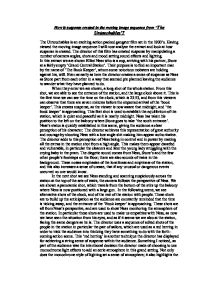 How is suspense created in the moving image sequence from 'The Untouchables'?

How is suspense created in the moving image sequence from `The Untouchables'? The Untouchables is an exciting action packed gangster film set in the 1930's. Having viewed the moving image sequence I will now analyse the extract and look at how suspense is created. The director of this film has created suspense by manipulating a number of camera angles, shots and mood setting sound effects and lighting. In this extract we are shown Elliot Ness who is a cop, arriving with his partner, Stone at a fairly empty `Grand Central Station'. Their purpose is to find an important man by the name of `The Book Keeper', whom some notorious mobsters are holding against his, will. Even as early as here the director creates a sense of suspense as Ness as Stone part from each other in a way that seemed pre planned leaving the audience to wander what they have planned to do. When they enter we are shown, a long shot of the whole station. From this shot, we are able to see the entrance of the station, and the large clock above it. This is the first time we can see the time on the clock, which is 23:53, and from this viewers can observe that there are seven minutes before the expected arrival of the `book keeper'. This creates suspense, as the viewer is now aware that midnight, and `the book keeper' is approaching. This first shot is used to establish the equilibrium of the station, which is quiet and peaceful as it is nearly midnight. ...read more.

The tension building background music is the only stylistic sound effect, and the high angle shot ensures the struggling mother exhibits to the audience an obstruction to Ness in her vulnerable state. As Ness looks at them, there is a close up shot of his face, which is in juxtaposition with the close up of the clock. This increases the suspense as the audience are once again reminded that time is passing and the `Book keeper' will be arriving in a matter of minutes. We see a shot of a man walking with a newspaper down the stairs, and when he reaches the bottom of the stairs, we see a mid ranged shot of him leaning against a pillar reading his newspaper. All the while, Ness watches him, scanning his every move. This is because the man looks like a gangster and would fit the description of one perfectly, as he is wearing a dark suit, with shoes complete with toecaps. There is again another red herring is created leading us to believe he is the `Book keeper' but as a young woman embraces him at the bottom of the stairs and walks away we find that this is untrue. This is successful in creating more suspense and anticipation in the wait of the `Book keeper'. This scene has the diegetic sound of the baby crying and his mother who tries but fails to comfort him. She says " Don't worry darling, we'll be home soon. Everything will be alright". This is quite ironic as obviously everything will not be all right, as we can tell by the size of the role of the mother and the baby that they play a large role in the end. ...read more.

This is creating suspense and the audience who saw the `cute' baby earlier get curious to see if the baby lives, or the gangsters? As Ness notices the pram going down the stairs he moves to save it. As he does this he shoots the gangsters and miraculously does not get shot once, at this point the expression on Ness's face is of complete determination. This also builds suspense, as the viewers want to see if his hard work gets paid off and if the baby is saved. As the pram is going down and about to reach the bottom, Ness's bullets run out and he is left with an empty gun, but then we see Ness's partner Stone who jumps in and throws a gun at him. Tension increases to see if Ness catches it when he successfully does, he shoots the last gangster, and Stone slides underneath the pram just in time to stop it hitting the floor. The resolution was reached once the shooting is over and its mother retrieves the baby. The director chooses to use an extreme close up of the smiling blue eyed baby, to once again symbolise triumph for the good: Blue eyes, and fair hair and innocence of babies symbolising purity which will win over the bad despite of the chaotic surrounding. The music that accompanies this shot is again the non-diegetic music of the lullaby music, and assures the audience that everything is all right again. When I first watched this sequence I felt the apprehension in the atmosphere because of the setting and the way the shots were devised. Having viewed and analysed this moving image it is clear suspense is created in a detailed and sustained way. ...read more.