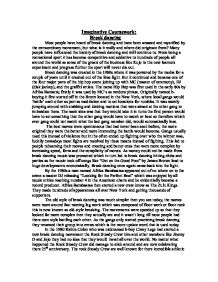 Imaginative Coursework: Break dancing Most people have heard of break dancing and have been amazed and mystified by the extraordinary movement, but what is it really and where did originate from? Many people have influenced the history of break dancing and will continue to. From being a recreational sport it has become competitive and addictive to hundreds of people all around the world as some of the greats of the business like Kujo to the new learners experiment and progress further the sport will never die out. Break dancing was created in the 1980s where it was powered by the media for a couple of years until it crashed out of the lime light. But it continued and became one of the four major parts of the hip hop scene joining up with MC (master of ceremony), DJ (disk jockey), and the graffiti artists. The name Hip Hop was first used in the early 80s by Afrika Bamatta; firstly it was used by MC's as random phrase. Originally named b-boying it first started off in the Bronx located in the New York, where local gangs would 'battle' each other as part as meditation and to set locations for rumbles. It was mainly jumping around with stabbing and kicking motions that were aimed at the other gang to intimidate them. The main idea was that they would take it in turns the first person would have to set something that the other gang would have to match or beat so therefore which ever gang could not match what the last gang member did, would automatically lose. ...read more.

No one even released that they had gone any where into the early 1990s The Rock Steady Crew were back. In 1992 they were invited to the Kennedy Centre where they met George Bush, Gregory Peck, and the Nicholas Brothers. A annual event reunites DJ's, b-boys / b-girls, graffiti artists, MC's and fans of all ages from all over the world. Unlike the old days they now have total control of there destiny because they are now not under management from anybody. Today The Rock Steady Crew work to continue hip hop on through the next generations and beyond by setting up break dancing lessons for all ages and helping them to stay on the right side of life. Bobbito or C.M. Famalam is DJ for The Rock Steady Crew he has traveled the world around ten times, five times Grammy award winner and also appearing in over 30 television and radio adverts. Bobbito joined the Rock Steady Crew in 1993 even though he is mainly associated with writing songs and background music. Richard "Crazy Legs" Col�n a 24 year old veteran of Hip Hop culture and one of the original members of The Rock Steady Crew he has been on many of the original tours during the 80s. He has been on television many times like in numerous films like Wild Style and Flashdance, documentaries about the history of dancing in America, Coke Cola videos and music videos. ...read more.

Tony is known to be on the road representing the RockSteady Crew and DJ'ing for their legendary anniversary celebrations. He can also be found DJ'ing at clubs in the United States, the Caribbean, and throughout Europe and Japan regularly. Fever One originally learned body locking or popping, but eventually gave into the strong push of break dancing In 1987 Icey Ice and Ness 2000 of the world famous New York City Breakers moved to Seattle, giving Fever the opportunity to dance with renowned, professional b-boys and to appear with DJ Mixmaster Ice. Fever joined a group of graffiti artists, b-boys, and DJs to create the Dropping Vicious Styles crew (DVS). Most performances during the early '90s were for Seattle youth and many performances were staged at the Langston Hughes Cultural Arts Center. Furthermore, Fever-One was one of three representatives selected to lecture and demonstrate in the first B-Boy instructional video entitled B-Boy foundations. Fever one has continuously been lecturing at many major Universities including Princeton, Yale and Rutgers. He has been featured in several music videos like DJ Honda, LFO and Tony Touch and judged battles for Rock Steady Crew and Zulu Nation anniversaries. In conclusion the history of break dancing is very complex it all originated in the one central area of New York and has managed to grow and spread all over the world. No one knows where the future of break dancing will lead but it will never die out and will continue to amaze and stun people everyday. ...read more.