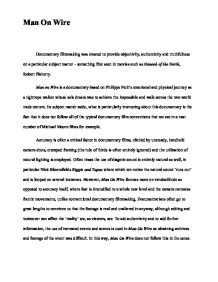 Man On Wire Documentary filmmaking was created to provide objectivity, authenticity and truthfulness on a particular subject matter - something first seen in movies such as Nanook of the North, Robert Flaherty. Man on Wire is a documentary based on Philippe Petit's emotional and physical journey as a tightrope walker whose sole dream was to achieve the impossible and walk across the two world trade centers. Its subject matter aside, what is particularly interesting about this documentary is the fact that it does not follow all of the typical documentary film conventions that we see in a vast number of Michael Moore films for example. ...read more.

Often times the use of diagetic sound is entirely natural as well, in particular Nick Bloomfields Biggie and Tupac where which we notice the natural sound 'runs out' and is looped on several instances. However, Man On Wire focuses more on versimilitude as opposed to accuracy itself, where fear is intensified to a whole new level and the camera recreates frantic movements, unlike conventional documentary filmmaking. Documentarians often go to great lengths to convince us that the footage is real and unaltered in anyway, although editing and voiceover can affect the 'reality' we, as viewers, see. ...read more.

Most would agree that films such as Spurlock's Supersize Me would easily fit under the documentary film genre as it follows many of the documentary film conventions, however, there are several scenes in which the use of childish music totally undermines the McDonalds Corporation. This technique is similarly, and unconventionally, used in Man On Wire. Other ways in which Man On Wire doesn't follow conventional film documentary styles is the fact that a particular mood and tone is created and enhanced. It can be perceived as Avant-garde to a certain extent through its innovative and experimental ways - pushing the boundaries so to speak. ...read more.

*** This is a good essay. The candidate has employed some key terms related to the documentary genre and to technical codes and conventions. The essay as a whole lacks in depth analysis. Most analysis is rather brief and could be developed much further. In addition, many more examples of moments from the film are needed.