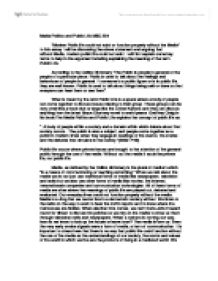 &quot;Modern Public life could not exist or function properly without the Media&quot;

Media Politics and Public Life MSC 234 "Modern Public life could not exist or function properly without the Media" In this essay I will be discussing the above statement and arguing that without Media, modern public life could not exist. I will first explain some key terms to help in the argument including explaining the meaning of the term Public Life. According to the Collins Dictionary "The Public is people in general or the people of a particular place. Public is used to talk about the feelings and behaviours of people in general. If someone is a public figure or is in public life, they are well known. Public is used to talk about things being said or done so that everyone can hear them or see them". What is meant by the term Public Life is a space where a body of people can come together to discuss issues relating to their group. These groups can be very small like a book club or large like the United Nations and they can discuss anything from the latest Bryce Courtney novel to world peace. Geoffrey Craig in his book The Media Politics and Public Life explains the concept of public life as: "..A body of people within a society and a domain within which debate about that society occurs...The public is also a subject, and people come together as a public in modern times when they engage in readings of the events, the stories and the debates that circulate in the society."(2002. ...read more.

This limited the voice of the people to only those that were upper-class, well educated men that could travel. This was not representative of the wider communities. The next stage in the evolution of public life was when the printing presses made literature available to the mass public. This literature was free from state control and was the newest site for public life to be played out on. Of course if you were illiterate the medium was useless but for those that could read and had access to the literature a new public was formed. The reading public was not tied by geographical restrictions. The development of film was again a new medium that with it brought a new public. By now we have to understand that there are a huge amount of publics that all have their own issues to debate. A person can be part of a number of publics at one time. She may be a single mother, working at the supermarket, she is part of the conservative party, is a part of a sci-fi reading club, she buys Thai cooking books, buys red wine and goers to wineries, is part of a mothers group at day care, has a network of other single friends on the internet and is part of a union at work. All of these publics want very specific things and all lobby for different things, the private issues become public when they are played out through the different types of media. ...read more.

In Australia there are laws that ensure that one source does not have monopoly over the content of our media, Australia's former prime minister Paul Keating put it best when he said that the cross ownership laws meant you could be a 'prince of print or a queen of screen' but not both. This means that one person will not be in control of all of the media of our country and so a true representation of society's issues would be presented by the media. Again without the media, Australia would not be able to be a democratic society and have a public life. Through many different sites issues and events are played out and become open to the scrutiny of the general public. These different issues and events create discussion between the people that read or hear about them and this is what is meant by a public life. People that are hundreds of miles away from each other can be discussing the same issues without even having to talk to one another. These systems of communication enable us to live in a democratic society, a society where we can chose who leads us in government and we can discuss issues relating to our society. This would not happen if wasn't for the role of the media. Without the media to portray issues and events we would never hear about a sale on in the city or about governmental policy that is set to affect us all. Public life as we know it would not be able to function properly without the media. ...read more.