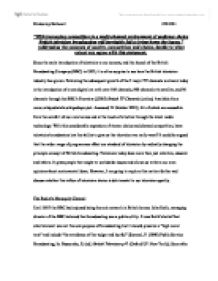 "With increasing competition in a multi-channel environment of audience choice British television broadcasting will inevitably fail to bring home the bacon." Addressing the concepts of quality, competition and choice, decide to what extent you agree with this statement. Since the early introduction of television to our screens, and the launch of the British Broadcasting Company (BBC) in 1922, it is of no surprise to see how the British television industry has grown. Following the subsequent growth of the 5 major TV channels we know today is the introduction of a new digital era with over 106 channels, 800 channels via satellite, and 30 channels through the BBC's Freeview [(2005) British TV Channels [online] Available from www.wikipediatalk.wikipediaproject. Accessed 21 October 2005]. All of which are accessible from the comfort of our own homes and at the touch of a button through the latest media technology. With this considerable expansion of viewer choice and channel competition, have television broadcasters lost the ability to give us the television we really want? It could be argued that the wider range of programmes affect our standard of television by radically changing the principle concept of British broadcasting. Television today does more than just entertain, educate and inform. ...read more.

It was the most profitable programmes that were aired, regardless of their quality, or their disregard for public service. [Goodwin, A. and Whannel, G. (1990) Brunsdon, C and Caughie, J (eds.) Understanding television (London: Routeledge, p11-16)]. The future of broadcasting was chaired by Lord Annan, who raised the point that although the BBC should be praised for its "...responsible approach to public interest...", it was clear that people began to object to biased programmes led by the government. He said "...broadcasters were not challenging enough..." and hid behind government and vested interests to produce "...programmes which bolstered up the status quo and concealed how a better society could evolve." [Annan Committee 1977: 15]. In fact, the European Union at this moment is debating whether broadcasting could help the development of a society we should aspire to by airing cultural and educational programmes [Ursell, G. (2003) Creating Value and Value Creation in Contemporary UK television: or "dumbing down" the workforce. Journalism Studies, Vol 4, No 1, p31-46] Annan wanted to create a service that catered for the minorities and social groups that were previously excluded from BBC and ITV. Annan had a concept of 'The Open Broadcasting Authority' and thus, Channel Four was born. ...read more.

This could be why top-rated, cheap programmes such as 'Big Brother'/ 'Pop Idol' find it hard to create valuable television. Conclusion It is clear that television broadcasting has experienced many radical changes since it began. Perhaps these changes could be viewed as constructive as they innovatively keep up with our changing societal needs, and channels change to keep their competitive edge. Advanced technology, such as the introduction of digital television, has helped television move on to a new kind of viewing. Could you really imagine watching TV today from one channel only with no choice in what you are watching? The growth and development of television was, perhaps, inevitable. But in light of the question at hand, it does seem apparent that the increase of competition has led channels to become more productive and under pressure to gain market share over their competitors. Channels that are profit-led are the most susceptible to producing nonsense, as tight budgets, minimal staff and short timelines force production to be cheap and sometimes of a lesser quality. I deliberate as to whether 'free' and competitive TV does mean curtains for quality television. Perhaps the effects of inadequate programming have not made a big difference yet, but I think if the classic scenario of 'quantity versus quality' continues television broadcasting will certainly "fail to bring home the bacon" in the foreseeable future. ...read more.