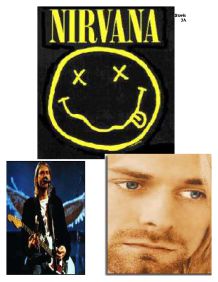 Nirvana is a band, which formed in 1987, and it has become popular over the last decade or so. The band unfortunately broke up in 1994 due to the suicide of the lead singer, Kurt Cobain. Although Kurt has been dead for just over a decade, the memory of him lives on, as does the music he wrote. In the project on Kurt and Nirvana, I am going to tell you about the life of Kurt, the band; Nirvana, and the meanings behind the songs which were written. Nirvana with their friend Andy who did the dancing in the video for Nevermind Kurt Donald Cobain was born on the 20th February 1967 to Donald and Wendy Cobain. His mother was a cocktail waitress and his father a mechanic. They lived in a small town 140 Km south of Seattle called Hoquaim. They soon moved to a town called Aberdeen, a much nicer place. This is where the band was originally started. His father got a new job as a lumber mill. He counted logs while Kurt's mother stayed at home and looked after the children. At the early age of 2, Kurt started to show an interest in music. His mother not surprised, because her side of the family were musically talented. Kurt's aunt Mary tried to teach him to play guitar, but he couldn't stay still for a long time, because he was too hyper. The doctors prescribed a drug called Ritalin for Kurt but it would keep him awake till 4 in the morning sometimes. Kurt's mother decided to get him a drumset. Every day after school, Kurt would come home and beat the drum to a pulp. One day the drumset just broke. After that Kurt would go over to his uncles and be given a microphone. He would then be taped while he was singing in the basement. Kurt's family were poor, but tried to hide it. ...read more.

I can't stand the thought of Frances becoming the miserable self-destructive, death rocker that I've become. I have it good, very good, and I'm grateful, but since the age of seven I've become hateful towards all humans in general. Only because it seems so easy for people to get along, and have empathy. Empathy! Only because I love and feel for people too much I guess. Thank you all from the pit of my burning nauseous stomach for your letters and concern during the past years. I'm too much of an erratic, moody baby! I don't have the passion anymore and so remember, its better to burn out than to fade away. Peace, love, empathy. Kurt Cobain Frances and Courtney, I'll be at your alter. Please keep going Courtney For Frances For her life which will be so much happier without me. I Love you. I love you!' Nirvana: a history. The core of Nirvana was Kurt Cobain, lead guitarist and vocalist, and Krist Novoselic, bass player. After going through many different name changes and member changes, Kurt and Krist met Chad Channing, who became their drummer for their debut album. Some of the other notable people that were in the band, or its earliest recordings, were Buzz Osbourne and Dale Crover of the Melvins and Danny Peters of Mudhoney. Nirvana recorded their Bleach album for about $600. It was a dark, crunching album containing simple, guitar driven songs such as Negative Creep and School as well as more sophisticated songs, which include About a Girl, and a modified version of Shocking Blue's Love Buzz. It was released in June of '89 by Sub Pop records. After recording, and the addition of guitarist Jason Everman, Nirvana went on tour. Jason was added because Kurt wasn't sure he could handle singing and playing guitar at the same time. Jason also helped contribute quite a bit of the money to record the debut album. ...read more.

A bunch of random poetry lines thrown together. The title is a reference to "Smells Like Teen Spirit" and it's slick, radio-friendly sound Tourette's - This song has no meaning at all. Kurt just screamed a lot. Based on tourette's syndrome, which causes one to shout out obscenities at any time All Apologies - Contrary to popular belief, this song is not about Francis and Courtney. He wrote it for them, but none of the lyrics really apply Gallons of Rubbing Alcohol Flow Through the Strip - More or less, a poem to words. This is an improved-style song B-Sides, Rarities, & Compilation Tracks Even in His Youth [Smells Like Teen Spirit single] - Those who where born to the burgoise, and never saw their way out of it, and how Kurt is glad he wasn't one of them Sappy [No Alternative CD] - About weaklings who cling to people with powerful ideas, even though they may be sucking themselves into something that is less than positive. Could also possibly be aimed at the church Nirvana was formed in 1987 and has been going for over a decade. Many people like them as much as they did when they first became popular back in 1990 when Bleach was released. Nirvana has no more songs to release, but they don't have to, they already have enough good ones. The remaining members of the band are currently considering putting all the songs they have ever made onto a box set CD. This would be done as a tribute to the man which formed the band, and who was the lead vocalist and guitarist, Kurt Cobain. In this project, I have tried to explain to you about the hard life that Kurt Cobain had, the way he got through it and how he made his music and what he meant the words of the songs to mean. I hoped you enjoyed reading this and that it has given you some idea of the band. Johan Stovin 3A Johan Stovin 3A ...read more.