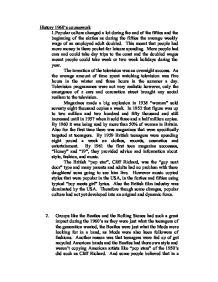 Popular culture changed a lot during the end of the fifties and the beginning of the sixties as during the fifties the average weekly wage of an employed adult doubled.

History 1960's coursework 1.Popular culture changed a lot during the end of the fifties and the beginning of the sixties as during the fifties the average weekly wage of an employed adult doubled. This meant that people had more money in there pocket for leisure spending. More people had cars and could take day trips to the coast and the doubled wages meant people could take week or two week holidays during the year. The invention of the television was an overnight success. As the average amount of time spent watching television was five hours in the winter and three hours in the summer a day. Television programmes were not very realistic however, only the emergence of z cars and coronation street brought any social realism to the television. Magazines made a big explosion in 1938 "woman" sold seventy eight thousand copies a week. In 1952 that figure was up to two million and two hundred and fifty thousand and still increased until in 1957 when it sold three and a half million copies. By 1960 it was being read by more than 50% of woman in Britain. ...read more.

And some people believed that in a couple of there songs they encourage drug taking, in songs like " Lucy in the sky with diamonds " which the press took as meaning LSD was a good thing. However to this day John Lennon still insists that the song is about a picture his son drew in school. For Rockers there were the Rolling Stones as Rockers also wanted to break away from society and so did the Rolling Stones. The Rolling Stones wrote songs about "s****l freedom" and "drugs" this is shown in their songs "satisfaction" and "brown sugar". Also the Beatles changed with the teenagers of the era they changed from the clean-cut boys of 1963 and became the weird and wonderful followers of Maharishi, an Indian guru. The Rolling Stones also changed through the 1960's they started as Beatles look-alikes, but soon changed and became a completely different style. Their lyrics, such as "Satisfaction" and "Brown Sugar", were far more suggestive of the five members of the bands behaviour, especially the lead singer Mick Jagger, attracted a great deal of attention. ...read more.