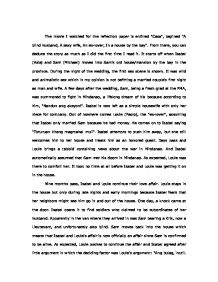 The movie I watched for the reflection paper is entitled "Casa", taglined "A blind husband, A sexy wife, An ex-lover, In a house by the bay". From there, you can deduce the story as much as I did the first time I read it. It starts off when Isabel (Asia) and Sam (Michael) moves into Sam's old house/mansion by the bay in the province. During the night of the wedding, the first s*x scene is shown. It was wild and animalistic s*x which in my opinion is not befitting a married couple's first night as man and wife. A few days after the wedding, Sam, being a fresh grad at the PMA, was summoned to fight in Mindanao, a lifelong dream of his because according to him, "Nandun ang aksyon!". Isabel is now left as a simple housewife with only her niece for company. Out of nowhere comes Louie (Paolo), the "ex-lover", assuming that Isabel only married Sam because he had money. He comes on to Isabel saying "Tuturuan kitang magmahal muli". ...read more.

As expected, Louie pushes to continue the affair and Isabel agreed after little argument in which the deciding factor was Louie's argument: "Ang bulag, inutil. Ang bulag, HINDI NAKAKAKITA!" And so they carry on with the sick business, in the same freaking house! Louie still stays there everyday during nights and early mornings and they continue to do their evil all over the house. This goes on for I don't know how long. One day, Sam wakes up and miraculously regains his vision and doesn't tell Isabel, because from what I gather, Sam was intelligent enough to suspect his wife, although one can only suspect so much when you're suddenly blind. That night, Sam finally witnessed firsthand the stupidity happening in his own house. He still had hesitation that night but not after he finally thought things over, his decision was to kill Louie but not Isabel because he said they would both end up in h**l and "Ang demonyo, kunsintidor yan. ...read more.

Women are being degraded, and the film seems to show that women enjoy being degraded after all. The s*x roles assigned to males and females are also evident in this movie. Men are the breadwinners, the typical job is something related to physical labor such as working in the military. Women are left in waiting, they attend to household work and maintenance, stuff like that. But the infidelity of the wife is what deviates from the stereotypical gender norms, as men are the ones seen to have more tendencies towards polygamy. This is in accordance to the concept of machismo, wherein men feel that they can prove or strengthen their masculinity based on the number of partners that they have. In general, I didn't like the film. As in not one bit. Such badly-made films like these not only bring disgrace to the film industry, but to Filipino culture as well, as these forms of media reflect and inevitably influence culture. Either they support the stereotyped s*x roles, go against them, or define a fine line between typecasting and authenticity. But whatever Casa did, it did badly. This ought to be condemned. ...read more.