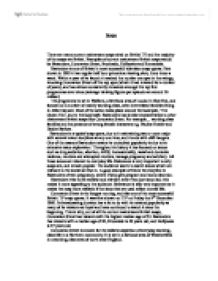 Soaps There are many current mainstream soaps aired on British TV and the majority of the soaps are British. Examples of current mainstream British soaps would be Eastenders, Coronation Street, Brookside, Hollyoaks and Emmerdale. Eastenders is one of Britain's most successful television soap operas. First shown in 1985 it has regular half hour primetime viewing slots, three times a week. Within a year of its launch it reached the number one spot in the ratings, knocking Coronation Street off the top spot (which it had retained for a number of years), and has almost consistently remained amongst the top five programmes ever since.(average viewing figures per episode are around 16 million) The programme is set in Walford, a fictitious area of London's East End, and focuses on a number of mainly working class, often interrelated families living in Albert Square. Most of the action takes place around the local pub, 'The Queen Vic', and in the local caf�. Eastenders has similar characteristics to other mainstream British soaps like Coronation Street. For example... working class families and the presence of strong female characters e.g. ...read more.

And its sense of community has created a loyal following. From its opening sequence with scenes of terraced houses, there is a strong sense of regional and local identity which is also shown through the dialect of the characters. This programme shows a high degree of realism due to its everyday looking homes, pub, shops, streets and characters. The storylines of Coronation Street normally concentrate on relationships within and between families rather than on social issues and issues that are currently present in the media like in the newer soaps e.g. Eastenders and Brookside. Like Eastenders, Coronation Street also has an average audience of 16 million, and its longevity and success retain its audience. Mediational techniques are used in soaps. Unlike in Australian soaps, British soaps mainly have the use of diagetic sound; this makes it more like real life, therefore making it more realistic. Also they normally use 2 cameras and this also makes it more realistic. The use of the 'over the shoulder shot' gives the audience the impression that they are seeing it from the characters point of view. ...read more.

They must have better storylines which are more interesting, gripping and dramatic; also the storylines must deal with issues of everyday life as this makes the soap more realistic and relevant to the lives of the audience. The soap must have good strong actors and some stereotyped characters which the audience can relate to. Scheduling is also very important to how popular a soap is. If the soap is broadcast at primetime it is more likely that the soap will get a larger audience, also if the programme is scheduled at a time suitable for its audience it will increase the chance of popularity. I think overall Eastenders is more popular than Coronation Street and other mainstream British soaps because although it maintains the important soap opera qualities, it distinguishes itself from other British soaps by appearing courser, faster paced and more dramatic than Coronation Street, more humorous than Brookside and more realistic than Hollyoaks and Emmerdale. Eastenders also has a variety of issues presented through the different characters. This makes the viewers more involved with the families and personal lives of the characters and with the realistic situations and personal dilemmas they go through. And the genre has retained its undoubted popularity among the British audience and has established itself as a piece of primetime broadcasting in Britain. ...read more.