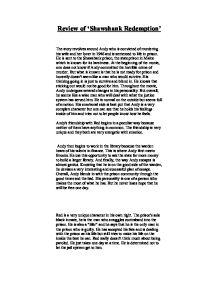 Review of 'Shawshank Redemption' The story revolves around Andy who is convicted of murdering his wife and her lover in 1946 and is sentenced to life in prison. He is sent to the Shawshank prison, the state prison in Maine which is known for its harshness. At the beginning of the movie, one does not know if Andy committed the horrible crime of murder. But what is known is that he is not ready for prison and honestly doesn't seem like a man who would survive. His thinking going in is just to survive and blend in. He knows that sticking out would not be good for him. Throughout the movie, Andy undergoes several changes in his personality. But overall, he seems like a wise man who will deal with what the justice system has served him. He is normal on the outside but seems full of emotion. His emotional side is best put that Andy is a very complex character but one can see that he holds his feelings inside of him and tries not to let people know how he feels. ...read more.

Red is a man who knows the rights and wrongs of the prison and it seems that Andy becomes his apprentice during the movie. Overall, Red is a subtle man who tries not to be noticed. His personality is one of perseverance and he is ready to accept what the system may deal him. Talking about the warden is difficult just for the reason that he is a cruel man who represents evil and unfairness in the movie. The reason the warden takes a liking to Andy is because Andy is an accomplished accountant who can help him cheat the state. The opportunistic Andy takes advantage of this by reading the Bible (to impress the warden) and basically doing what he is told. This leads to the warden's demise (trusting Andy too much) and Andy's escape. The personality of the warden does not change much throughout the movie. Even if he does something nice (letting Andy help fellow inmates), his sole purpose is to profit and be in charge. He shows off his power many times and in the cruelest way. ...read more.

This inspiration is created by the actions and words of various characters. It is actually an inspiration to the viewer to always have hope and pursue your goals. Red said, "Hope is dangerous on the inside." He was saying that having hope could drive a man crazy but in all reality he had hope in himself. This was untrue because Brooks' death signified a lack of hope. He really had no one and the inmates were his family. Leaving the prison was devastating and he just thought nothing of life. Red was contradictory to his own words because he ended up surviving and succeeding all because of the hope that he had. The personalities of the characters create an almost unreal setting where you see things you may not expect to see. A community of people is what the movie is about. A community which goes through good times and bad ones. But the characters are what makes this film so unique and so great. ...read more.