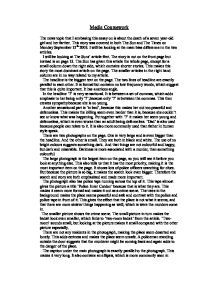 The death of a seven year-old girl and her farther was covered in both The Sun and The Times on Monday September 15th 2003 - I will be looking at the main bias difference in the two articles.

Media Coursework The news topic that I am basing this essay on is about the death of a seven year-old girl and her farther. This story was covered in both The Sun and The Times on Monday September 15th 2003. I will be looking at the main bias difference in the two articles. I will be looking at The Suns' article first. The story is not on the front page but instead is on page 13. The Sun has given this article the whole page, except for a small column down the right side, which contains shorter stories. This makes this story the most dominant article on the page. The smaller articles in the right hand column are in no way related to my article. The headline is the biggest text on the page. The two lines of headline are exactly parallel to each other. It is formal but contains no low frequency words, which suggest that this is quite important. It has a serious angle. In the headline '7' is very sensational. It is between a set of commas, which adds emphasis to her being only '7',because only '7' is between the commas. This then creates sympathy because she is so young. Another sensational part is 'in bed', because this makes her out too peaceful and defenceless. This makes the killing seem even harder than it is, because she couldn't see or know what was happening. Put together with '7' it makes her seem young and defenceless, which is even worse than an adult being defenceless. ...read more.

Because why would the father let a little girl live with him if he had been shot at. Surely, she was not safe with him. And then serving time 'for drugs' makes him out to be a bad man. Someone that should not have children around them. We also learn that the father does not even have a proper name but that 'Toney' is what people called him. This again makes him seem like a shifty character and is sensationalising. Because the girl had died a woman 'laid flowers' outside the bedsit. It tells us where the bedsit is 'Kensal Green, North West London'. This is biased, as it is almost a warning for us to stay away from that place. And is biased towards the farther, as it makes you ask, why would he let her stay there if it was dangerous. Sensationalism is used when it is told that she was 'to start primary school today'. 'Primary' is the school for young children, which creates sympathy and emphasises her age again. 'Youngster' is also loaded here. Extra information about the girl's mother is given, that she still lives 'in Kingston, Jamaica'. We do not need to know this but are told because it means the girls was here without her mother. This then creates the sympathy for the girl, for being without a mother. We then get told that a Scotland Yard division that 'tackles crime between black people' are going to take the case; it tells us that the father might have gotten into some big trouble. ...read more.

The women also says that she had 'seen police in the' 'building'. Which then makes it seem like they are biased against the father but the she says she 'was not sure' which flat they had been visiting. So the father is not bad over all. One of the other quotations is from 'an IT operations manager from Notting Hill' making him seem respectable and so whatever he says must be right. He calls the place 'murder mile', which has been discussed because it is in the headline. He says that the area 'frequently has police' and that there is 'a lot of crime.' This makes the area seem bad and creates bias for the father. But then he says that it is 'very unusual for a family to be affected.' Effectively taking it back and taking the blame of the father. 'Family' in the quote is loaded because it makes them a 'family' whereas before they are only referred to as 'father' and 'daughter'. The audience for this article are 'normal' people. It is formal but does not contain lots of low frequency words. No text brakers of bullet points are used, which adds to its formality. Thus it can be seen that The Times' article is a lot less biased then The Suns'. And also that The Suns use lots more techniques than The Times in these articles. The Times relates less to the reader, by using less emotive. The Sun uses more emotive words, which in turn creates more bias against the father. The Sun starts bias against the father from the very beginning. The Times shows bias, further in the article. ...read more.