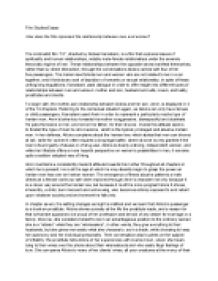 The nature of the relationship between men and women in Abbas Kiarostami's &quot;10&quot;

﻿Film Studies Essay How does the film represent the relationship between men and women? The minimalist film ?10?, directed by Abbas Kiarostami, is a film that explores issues of spirituality and human relationships, notably male-female relationships under the severely theocratic regime of Iran. These relationships between the opposite sexes manifest themselves, rather than by direct interaction, through the conversations Akbira carries with four of her five passengers. The Iranian law forbids men and women who are not related to be in a car together, and it forbids any sort of depiction of romantic or s****l relationship. In spite of these unforgiving regulations, Kiarostami used dialogue in order to offer insight into different types of relationships between men and women: mother and son, husband and wife, lovers, and lastly, prostitutes and clients. To begin with, the mother-son relationship between Akbira and her son, Amin, is displayed in 4 of the 10 chapters. Referring to the contextual situation again, as Akbira can only have female or child passengers, Kiarostami used Amin in order to represent a particularly macho type of Iranian man. ...read more.

In chapter seven, the setting changes as night is instilled and we learn that Akbira?s passenger is a drunken prostitute. Akbira shows curiosity at the life the prostitute leads, and a reason for that is that she appears to be proud of her profession and devoid of any desire for marriage or a family. More so, she considers herself to be in an advantageous position to the ordinary woman: she is a ?retailer? while they are ?wholesalers?, in other words, they give everything to their husbands, but she gives men solely what she chooses to, as in a trade, while choosing to keep her autonomy and her individual personality. Their conversation also touches on the subject of infidelity: the prostitute tells Akbira of her experiences with married men, whom she hears lying to their wives over the phone about their whereabouts and who easily feign feelings of love. She compares Akbira to many of her clients? wives, all poor creatures at the mercy of their men. This is a woman whose choice to prostitute may base on her unwillingness to conform to the expected Iranian norm of being under the confined, absolute possession of a man. ...read more.

This is a key scene into revealing the nature of Iranian men-women relationships, as it essentially shows how women appreciate their value in a relationship. The two characters of Akbira and her passenger contrast in their expectations from themselves and from a man. Akbira, in a feminist surge to console the other woman, emphasizes the importance of things like self-respect, experience and pleasure in a woman?s life. She states: ?We women are unhappy, we don?t know how to life for ourselves?. She calls her sadness over losing her partner a ?weakness? because it essentially means she is clinging to him. It is interesting to note that she used the same word the prostitute used in chapter eight, thus suggesting that she may have not only understood the prostitute?s motives and views but also considered them rightful. Therefore, despite the absence of male characters in the film 10, Kiarostami is still able to imply different types of relationships, purely by observing the interactions Akbira has with her various passengers. The general sense one gets from watching this film is of a cruel inconsideration on men?s part in the Iranian society. Women are portrayed as being at loss to men, a situation dictated both by law and by society?s moral codes. ...read more.