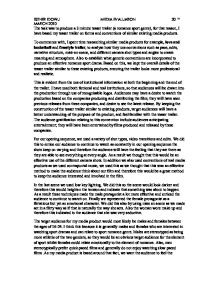 The task was to produce a 3 minute teaser trailer (a romance sport genre), for that reason, I have based my teaser trailer on forms and conventions of similar existing media products.

The task was to produce a 3 minute teaser trailer (a romance sport genre), for that reason, I have based my teaser trailer on forms and conventions of similar existing media products. To commence with, I spent time researching similar media products for example, love and basketball and freestyle trailer, to analyse how they use conventions such as pace, edits, narrative structure, mis�-en-scene, and different camera shot types and angles to create meaning and atmosphere. Also to establish what generic conventions are incorporated to produce an effective romance sport drama. Based on this, we kept the overall details of the teaser trailer similar to these existing products, ensuring the trailer looks more professional and realistic. This is evident from the use of institutional information at both the beginning and the end of the trailer. I have used both fictional and real institutions, so that audiences will be drawn into the production through use of recognisable logos. Audiences may have a desire to watch the production based on the companies producing and distributing the film; they will have seen previous releases from these companies, and desire to see the latest release. ...read more.

I think this because it is generally males and females who are interested in watching sport dramas and can relate to sport romance genre. Males are stereotyped as being more athletic of the two genders, so they would be an obvious target audience for the element of sport whilst females could relate emotionally to the element of romance. Also, men stereotypically prefer quick paced films and generally do not enjoy watching slow paced films .As my media product is based around that fact, we want the audience to feel the intensity of the game like the main character and sympathise with the female character, it would be wise to suggest that the audience for my media product would be predominately male and female. We tried to attract and address our audience to watch the film in a variety of different ways. Firstly we tried to attract our audience by making our opening sequence look exciting and therefore make the audience feel the hype about the opening sequence. In addition we also made our opening sequence quick, for instance we used long shot a lot of the time and when we edited the film we tried to create meaning in the editing, we did this ...read more.

I included the hermeneutic code at the end of the teaser trailer, described by media theorist Roland Barthes, ensuring the dialogue and narrative is equivocal by not giving audiences the complete answers, thus increasing the tension of the product, and encouraging audiences to see the film at release. One of the main problems we encountered was the location. On a few occasions, the location (uni sports hall) we set out to use couldn't be used as it would be breeching their privacy. To fix this problem we had to change the location. However, in the end this did not appear to be a problem as the new location (a basketball court) was not in use and was just perfect. Another problem we encountered was background noise from the wind when filming scenes on the court. However, to fix this problem, we deleted all the audio from the filmed clips and replaced non-diegetic sound over the top, and recorded the audio clip of the characters dialogue separately. Within the advanced technology at my fingertips, I would not have had success in the creation of my productions; I have relied on technology to research my products, educate myself on programmes, and actually create the products.Therfore technology has been of a great help. ?? ?? ?? ?? ESTHER IDOWU MEDIA EVALUATION 30TH MARCH 2010 ...read more.