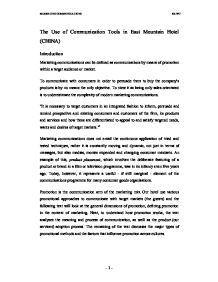 The Use of Communication Tools in East Mountain Hotel (CHINA) Introduction Marketing communications can be defined as communications by means of promotion within a target audience or market. To communicate with consumers in order to persuade them to buy the company's products is by no means the only objective. To view it as being only sales-orientated is to underestimate the complexity of modern marketing communications. "It is necessary to target customers in an integrated fashion to inform, persuade and remind prospective and existing consumers and customers of the firm, its products and services and how these are differentiated to appeal to and satisfy targeted needs, wants and desires of target markets."1 Marketing communications does not entail the continuous application of tried and tested techniques, rather it is constantly moving and dynamic, not just in terms of messages, but also medias, monies expended and changing consumer mindsets. An example of this, product placement, which involves the deliberate featuring of a product or brand in a film or television programme, was in its infancy even five years ago. ...read more.

(Fill, 2002, P.486) Any paid form of no personal communication through the mass media about a product or service by an identified sponsor is advertising. The mass media used include magazines, direct mail, radio, television, billboards, and newspapers. This is used when the sponsor wants to communicate with a number of people who cannot be reached economically and effectively through personal means. Personal Selling Personal, face-to-face contact between a staff's representative and those people with whom the staff wants to communicate is personal selling. Non-profit organisations, political candidates, companies, and individuals use personal selling to communicate with the publics. Public Relations A further element of the promotional mix is public relations, which is defined by the Institute of Public Relations (1986) as "the deliberate, planned and sustained effort to establish and maintain mutual understanding between an organisation and its public." Communication to correct erroneous impressions, maintain the goodwill of the hotel's many publics, and explain the hotel's goals and purposes is called public relations (PR). Unlike the other promotional mix elements, public relations are concerned primarily with people outside the target market, although it may include them. ...read more.

Sales Promotion Sales promotion communicates with targeted receivers in a way that is not feasible by using other elements of the promotion mix. It involves any activity that offers an incentive to induce a desired response by staffs, intermediaries, and/or final customers/guests. Sales promotion activities add value to the service because the incentives ordinarily do not accompany the service. According to the Institute of Sales Promotion, sales promotion is "...a range of tactical techniques designed within a strategic marketing frameworks to add value to a product or service in order to achieve specific sales and marketing objectives." This added value could be in the form of an inducement, (for example, price-offs, coupons, premiums, seasonal-offs) and is intended to encourage guests to act now rather than later. Conclusion In the previous chapter communication was discussed as a vital strategic element of hospitality organisations especially a new opened hotel and importance was given to integrating the various promotional tools to achieve an effective focus. The main influence for communications and other management functions must be directed by long term aims and objectives developed as part of a comprehensive strategy. ?? ?? ?? ?? MARKETING COMMUNICATIONS KE WU - 1 - ...read more.