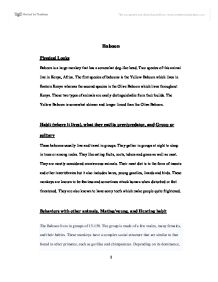 Characteristics of the Baboon

Baboon Physical Looks Baboon is a large monkey that has a somewhat dog-like head. Two species of this animal live in Kenya, Africa. The first species of baboons is the Yellow Baboon which lives in Eastern Kenya whereas the second species is the Olive Baboon which lives throughout Kenya. These two types of animals are easily distinguishable from their builds. The Yellow Baboon is somewhat skinner and longer limed than the Olive Baboon. Habit (where it lives), what they eat/its prey/predator, and Group or solitary These baboons usually live and travel in groups. They gather in groups at night to sleep in trees or among rocks. ...read more.

The group is made of a few males, many females, and their babies. These monkeys have a complex social structure that are similar to that found in other primates, such as gorillas and chimpanzees. Depending on its dominance, each baboon has a social ranking somewhere in the group. Female dominance is hereditary, with daughters having nearly the same rank as their mothers. Males, however, acquire their dominance more forcefully. They are known to try to bully other males and cow them into obedience. Fights are common between males, and the loser will submit to the strong one. Dominance among baboons means an easier time mating and earlier accesses to food. ...read more.

The reports about baboons indicate that three or four dominant males control the group and they are the ones who look out for danger, which is usually leopard. Leopards favor baboons on their menu and are important in limiting their population. In places where leopards are removed, baboon numbers rapidly increase. Young baboons are known to cling for life (literally) onto the fur of the mother's underbelly, until they grow big. Baboons are very curious and learn fast. They often approach cars and habitations, in which case they soon become a nuisance if they are fed by the unaware visitor. Baboons take an extremely wide range of food, such as grubs, spiders, scorpions, fruit, roots, insects and bird or reptile eggs. ?? ?? ?? ?? 1 ...read more.