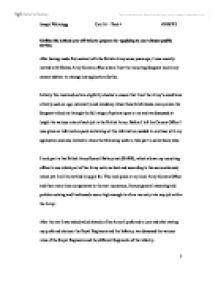 Outline the actions you will take to prepare for applying to your chosen public service.

Outline the actions you will take to prepare for applying to your chosen public service. After having made first contact with the British Army some years ago, I was recently invited to St Helens Army Careers office where I met the recruiting Sergeant and Army careers advisor to manage my application further. Initially this involved certain eligibility checks to ensure that I met the Army's conditions of entry such as: age, nationality and residency. Once these brief checks were proven the Sergeant talked me through the full range of options open to me and we discussed at length the various roles of each job in the British Army. ...read more.

I took part in the British Army Recruit Battery test (BARB), which allows my recruiting officer to see which part of the Army suits me best and according to the score achieved, which job I will be entitled to apply for. This took place at my local Army Careers Office and there were three components to the test: numeracy, literacy general reasoning and problem solving and I achieved a score high enough to allow me entry into any job within the Army. ...read more.

I was informed that the Army had a proposal in place to reduce the age limit for potential officers from twenty-nine to twenty-six and, being twenty-five at the time I had to achieve a minimum of one-hundred-and-eighty UCAS points before the following intake in autumn 2011. I have always been resolute in my ambition to hold the Queen's Commission and proceeded to find an alternative qualification that I would complete in time to acquire the relevant entry requirements. I found such a course in the way of a Btec level 3 Extended Diploma in Uniformed Public Services at St Helens College. ?? ?? ?? ?? Joseph Whitelegg Unit 16 - Task 4 43006701 1 ...read more.