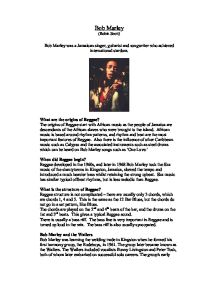 Bob Marley was a Jamaican singer, guitarist and songwriter who achieved international stardom.

Bob Marley (Robin Scott) Bob Marley was a Jamaican singer, guitarist and songwriter who achieved international stardom. What are the origins of Reggae? The origins of Reggae start with African music as the people of Jamaica are descendants of the African slaves who were brought to the island. African music is based around rhythm patterns, and rhythm and beat are the most important features of Reggae. Also there is the influence of other Caribbean music such as Calypso and the associated instruments such as steel drums which can be heard on Bob Marley songs such as 'One Love.' When did Reggae begin? Reggae developed in the 1960s, and later in 1968 Bob Marley took the Ska music of the shantytowns in Kingston, Jamaica, slowed the tempo and introduced a much heavier bass whilst retaining the strong upbeat. ...read more.

The Wailers included vocalists Bunny Livingston and Peter Tosh, both of whom later embarked on successful solo careers. The group's early recordings were in a style called ska, a hybrid of New Orleans rhythm and blues and Jamaican mento. Mento was the first of the reggae styles. By the late 1960s, influences from United States rhythm and blues, Jamaican folk rhythm, and dub were synthesized into the rock-steady and poppa-top styles, and Marley emerged as a rising talent in this new genre of Jamaican music. How was Bob Marley Associated with religion and black politics? In 1967 he converted from Christianity to Rastafarianism, a religion that has had a profound influence on reggae music. The Rastafarian movement of this period, among other beliefs, recognized Haile Selassie I, king of Ethiopia, as the living God; praised the spiritual effects of marijuana; and endorsed black racial superiority. ...read more.

His music has remained highly popular, and for many it has continued to symbolize the hopes of the downtrodden for a better life outside urban slums. The clarity, conviction, and sincerity of Marley's performances, and his unique, melodic style of song writing, have influenced many pop-music artists, including songwriter Stevie Wonder and rock guitarist Eric Clapton. How has Reggae influenced music? Reggae has had massive influences on pop music. With regard to the music of the 80s, Reggae did not become widely known in Britain until Eric Clapton recorded a cover version on Bob Marley's "I shot the sheriff" in 1974. Within a few years, groups such as the Clash, the Police and Madness were drawing on ideas from Reggae. The music of Sting has sometimes been described as 'white Reggae.' More recent influences can be detected in the music of Ragga artists such as Shaggy. ...read more.