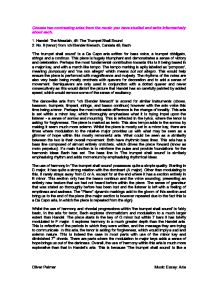 Choose two contrasting arias from the music you have studied and write informatively about each. 1. Handel: The Messiah, 48: The Trumpet Shall Sound 2. No. 6 (tenor) from Ich Elender Mensch, Cantata 48, Bach 'The trumpet shall sound' is a Da Capo aria written for bass voice, a trumpet obbligato, strings and a continuo. This piece is hugely triumphant and demonstrates a sense of victory and celebration. Perhaps the most fundamental contribution towards this is it being based in a major key, and with a march like tempo. The tempo marking is aptly labelled as 'pomposo', meaning pompously and 'ma non allegro' which means but not allegro. This would help ensure the piece is performed with magnificence and majesty. The rhythms of the notes are also very basic being mostly crotchets with quavers for decoration and to add a sense of movement. Semiquavers are only used in conjunction with a dotted quaver and never consecutively as this would distort the picture that Handel has so carefully painted by added speed, which would remove some of the sense of exultancy. ...read more.

This section only has the basso continuo and the voice sounding, presenting an entirely new texture that we had not heard before within the piece. The sense of grandeur that was stated so thoroughly before has been lost and the listener is left with a feeling of emptiness and sadness. The "Piano" dynamic markings add to the gloom of this section and bring us to the end of the piece (the major section is however repeated due to the fact this is a Da Capo aria, in which the piece is repeated from the sign). Whilst the use of harmony and chordal progressions within 'the trumpet shall sound' is fairly basic, in the aria for tenor, Bach explores chromaticism and modulation to a much larger extent than Handel. The piece starts in the key of G minor but within 7 bars it has briefly modulated to F major. It explores harmony to a much greater depth than the Handel aria. This is reflective of the periods in which they were written, and the message they are trying to communicate. ...read more.

Whilst both of the melodies in the pieces seem quite controlled, there are some instances in the Bach aria where the gentle nature is questionable. There is an instance when the voice leaps a 7th, up to an Ab which provides quite a striking change (as it is to a diminished chord). This could be to show anguish and pain. It is only brief, however there some other such instances that follow, perhaps to convey the same emotion. The setting of words and word-painting is something that Handel is often acknowledged for. His melismatic phrases within this aria are quite common. The first such instance is to the word "chang'd" where the voice takes part in producing an elaborate run of quavers in a sequential pattern. The word change is used as the notes are also changing. Less uses of melisma occur in the Bach aria except for in the small cases of two consecutive rising semiquavers that are used near the beginning of the phrases. Other such word painting is the use of seventh leaps. Oliver Palmer Music Essay: Aria ...read more.