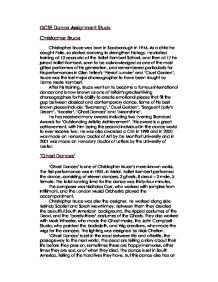 GCSE Dance Assignment Study Christopher Bruce Christopher Bruce was born in Scarborough in 1946. As a child he caught Polio, so started dancing to strengthen his legs. He started training at 13 years old at the Ballet Rambert School, and then at 17 he joined Ballet Rambert, soon to be acknowledged as one of the most gifted performers of his generation, and remembered particularly for his performances in Glen Tetley's 'Pierrot Lunaire' and 'Cruel Garden'. Bruce was the last major choreographer to have been taught by Dame Marie Rambert. After his training, Bruce went on to become a famous international dancer and is now known as one of Britain's greatest living choreographers for his ability to create emotional pieces that fill the gap between classical and contemporary dance. Some of his best known pieces include: 'Swansong', 'Cruel Garden', 'Sergeant Early's Dream', 'Rooster', 'Ghost Dances' and 'Moonshine'. He has received many awards including two Evening Standard Awards for 'Outstanding Artistic Achievement'. This award is a great achievement, with him being the second individual in the dance world to ever receive two. He was also awarded a CBE in 1998 and in 2000 was made an Honorary Doctor of Art by De Montfort University and in 2001 was made an Honorary Doctor of Letters by the University of Exeter. 'Ghost Dances' 'Ghost Dances' is one of Christopher Bruce's more-known works. The first performance was in 1981, in Bristol. ...read more.

There are also some acrobatic moves with handstands and rolls. At the end of this piece, where the prisoner is in the light, he too does a bird like movement, on one leg, arms raised to shoulder level. This links the two pieces even more. Accompaniment Both dances have accompaniment. 'Ghost Dances' has music all the way through and it changes for each individual dance but it keeps to the same type Andean folk music style. At the beginning there isn't a fixed music but a set of random sounds e.g. popping noises. The music was composed by Nicholas Carr and is played live every time by the London Musici Orchestra. 'Swansong' doesn't have much music through it, only at certain point when there is a major change in the dancing e.g. when the victim has been sitting on the chair but then is forced up and pushed so he falls backwards into the arms of a guard. The music is of an electronic style as it is digitally sampled and varied versions of acoustic sounds and was composed by Philip Chambon. I think the best accompaniment is the music for 'Ghost Dances' because it flows and sounds nice where as the music for 'Swansong' comes in short bursts and doesn't sound that nice. Costume The costumes for 'Ghost Dances' were obvious costumes to portray their characters; For the Dead, torn, ragged everyday clothes, and for the inhuman Ghosts, who had been dead a while, cloth. ...read more.

'Swansong', I think is the better dance when it comes to the set, stage and background. I like the way that everything is black and there is just a random chair. I like this because it makes the watcher focus more on the dance than the background or what else is happening on the stage. In 'Ghost Dances' the set, background and stage setting are perfect to match the dance but where the background curtain is full of interesting and murky colours, this catches the viewer's attention and their minds could be drawn away from the dance itself and o the background. Also there is a wall and what is meant to be rocks at the back of the stage but where the light is dimmed, the viewer may not be able to tell if the rocks are rocks or bushes, this then could divert the attention of the viewer. In my opinion, both dances are highly interesting to view and some critics agree but others unfortunately don't. Conclusion My favourite dance would have to be 'Ghost Dances' In conclusion, 'Ghost Dances' and 'Swansong' are both interesting and moving dances to watch but I prefer 'Ghost Dances' because the movement content and the moves themselves are more emotional and interesting that 'Swansong'. 'Swansong' doesn't have much unison and it's the unison used in 'Ghost Dances' that makes it highly interesting to watch. ...read more.